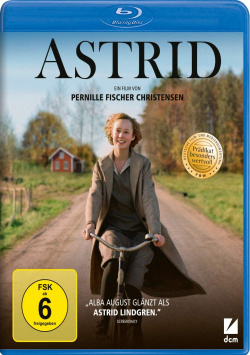 Film: Nobody in 1920s Sweden could have guessed that the girl with the pigtails, who doesn't like to abide by rules and often seems to live in her very own world, would one day become one of the most popular children's book authors in the world. The publisher Blomberg (Henrik Rafaelsen) quickly sees that the young Astrid (Alba August) is something very special when the 18-year-old girl starts as an intern at his newspaper. Despite the big age difference the two fall in love and Astrid gets pregnant. A catastrophe for her strictly religious family, which is why she is sent to Copenhagen, where she gives birth to her son. From now on the boy grows up with a foster mother (Trine Dyrholm), while Astrid builds up a new life in Stockholm. But soon she realizes: she doesn't want to lead this without her child…

"Astrid" tells only a short part of the life of Astrid Lindgren, long before she could celebrate great success with her books. Of course, here and there small scenes are interspersed which give an idea of what inspired the writer to create characters such as Pipi Longstocking or Lausejung Michel. It is a very moving story, because the boy grew up with a foster mother in the first years of his life and actually does not know his real mother at all. So the young Astrid does not only have to make ends meet as a single mother - which was even more difficult in the 1920s than it is today for various reasons. She must also try to establish a connection with her own - and yet somehow strange - child. Alba August plays the young Astrid Lindgren with a convincing mix of childish naivety and rebellious strength...

It's also she who rescues the film about some of its more lengthy moments. Director Pernille Fischer Christensen has staged a moving drama, that here and there suffers from a little bit of clichés and characters that are too often drawn in stencils. The convincing main actress and some very nice, emotional moments prevent "Astrid" from ever slipping into mediocrity, though. And for that there is also an absolutely deserved one: Worth seeing!

Picture + Sound: The picture quality leaves a very positive impression with very powerful colors and a high overall sharpness. This is underlined by the successful mixing of the contrasts and a good detail display, especially in the outdoor shots. The DTS-HD 5.1 mix is rather unspectacular, but captures the mood of the story well and reproduces the dialogues powerfully. All in all there is a deserved one for these technical aspects: Good!

Extras: Unfortunately there is no bonus material. What a pity!

Fazit: In the cinema "Astrid" had a more than respectable success with more than 330,000 visitors. The film will certainly be able to repeat this success in home cinema. Because the story from the youth years of the great children's book authoress Astrid Lindgren is well played and staged rousingly. The Blu-ray presents the film in good picture and sound quality. Only bonus material is unfortunately not available. Still, in the end, there's a clear one: Absolutely recommended!