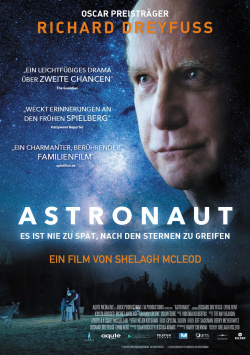 Angus Stewart (Richard Dreyfuss) has dreamed of flying into space as an astronaut for a long time. But at the age of 75, the retired road construction engineer is no longer one of the ideal candidates for such a mission. Worse still, in view of his advanced age, Angus has now also been deported by his family to a retirement home. Just when he seems to have lost all desire to live, a small glimmer of hope appears. The visionary self-made billionaire Marcus Brown (Colm Feore) gives away a free ticket for a commercial flight into space via a national competition. Convinced that he has no chance of winning anyway, Angus enters the competition under a false declaration of his date of birth - and actually makes it to the final selection. Now he has to fight against prejudice, his health and his family to win the ticket and fulfill his life's dream.

It is never too late to fulfill a dream. Canadian actress Shelagh McLeod, who switched to the director's chair at the age of 60 to direct her feature film debut "Astronaut", knows this too. The story about a pensioner who does everything to be allowed to fly into space is really charming. There are some not necessarily believable aspects in the course of the story. Nevertheless the whole thing has the heart in the right place. Unfortunately, McLeod doesn't manage to provide her production with the very charm that is actually inherent in this story. Even with great actors like Richard Dreyfuss or Graham Green the movie simply lacks the necessary esprit and the right timing. Especially towards the end the events are dominated by too much kitsch, which in turn leads to the fact that the viewer just doesn't get carried away emotionally. This makes "Astronaut" sound like a bad movie. But that's not really true. Because the story is as convincing in its core as the main actor. But because of the powerless realisation the whole thing unfortunately slides into triviality, which is almost worse than if the movie was just bad, considering the obvious potential.

"Astronaut" is a movie you would like to like. And there are always moments in which it succeeds a little bit. But all in all the drama loses itself in clichés, kitsch and unbelievable plot twists, which culminates in a finale that could have been really nice, but just doesn't work out that way. Therefore, at the bottom line there is a very hesitant "worth seeing" only with some significant drawbacks.