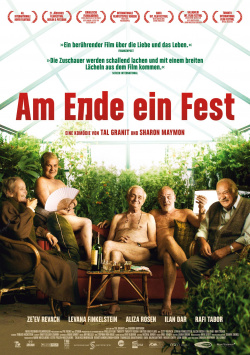 At the end of a party

Simply die with dignity - that's the last wish Max has left. But this wish is not fulfilled by his doctors. His best friend, 72-year-old inventor Yehezkel (Ze`ev Revach), wants to help Max. Together with his wife Yana (Aliza Rosen) and the retired veterinarian Dr. Daniel (Ilan Dar), Yehezkel succeeds in making it easier for his friend to die. To protect his legal rights, he developed a machine that enabled Max to decide at the touch of a button when he would be injected with the lethal dose of a sleeping pill. Actually, this machine should only be used this once. But then several people willing to die soon contact Yehezkel and his friends in order to get a quick, painless death possible. And this puts the old inventor in a difficult situation, especially as his beloved wife Levana (Levana Finkelstein) slips away from him more and more due to her Alzheimer's disease and he soon has to make a serious decision himself...

"At the end of a feast" dares to deal with the extremely difficult topic of euthanasia in a relatively humorous, easy way. The result is on the one hand very endearing and on the other hand entertaining in its own way. But that's exactly what makes it easier for the viewer to get involved with the story. As a result, you also develop a more emotional approach to the subject matter and the characters, which again is very depressing in some scenes. Even if there are some relieving moments of laughter, the movie as a whole still has a lot of pressure on your mind. You should be aware of this in any case before buying a cinema ticket.

The filmmakers Tal Granit and Sharon Maymon should be highly credited for having examined the problem very universally. The specific faith or the country in which the story is located plays a rather subordinate role. Here, thought-provoking impulses are given that every viewer can deal with in equal measure. At the same time, there is also a very nice story told, that works very sensitively with humorous elements and thus doesn't drag the viewer down too much. So you can finally leave the film with a tear in your eye and a smile on your face.

"At the end of a party" is primarily aimed at an audience of the generation 50+. But even younger viewers with a penchant for sophisticated tragicomedies and heart-rending arthouse cinema should not miss this little gem. Really a small party away from the mainstream and therefore also: Worth seeing!

Kino Trailer zum Film "At the end of a party (Israel/Deutschland 2014)"
Loading the player ...