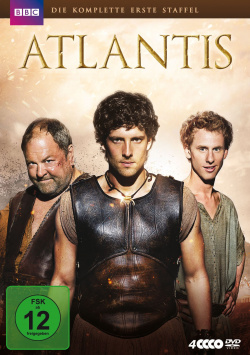 Film: Since his father disappeared on a diving expedition, Jason (Jack Donnelly) is on a desperate search for answers. When he dives for his father's submarine, he is attracted to a mysterious source of light - and suddenly he wakes up on a strange beach. The people he meets are all strangely dressed, and the city near the sea looks as if time had stood still here centuries ago. When he meets a two-headed lizard, Jason finally thinks he has lost his mind. But he does not have much time to wonder, for he is already being hunted by armed soldiers. He gets help from the clever Pythagoras (Robert Emms) and the strong Hercules (Mark Addy), who bring the confused Jason to the oracle (Juliet Stevenson). Here he learns that he came to Atlantis through a portal - just like his father before him. Jason's arrival was his destiny because only he could save the people of Atlantis. Jason no longer understands the world, but tries to come to terms with the situation with the help of his new cronies. But it doesn't take long before he has to fight the legendary Minotaurus, the beautiful Medusa (Jemima Rooper) from the clutches of the followers of Dionysus free or must stand up in the arena against wild bulls. And the longer he's in Atlantis, the more dangerous it gets for him. Because while Jason is the Redeemer for some, he poses a real threat to others. And just before King Minos (Alexander Siddig) he should be on his guard...

"Atlantis" is after "Robin Hood", "Merlin" or "The Musketeers" another BBC production in which well-known myths are reinterpreted. The result is an entertaining, though not particularly profound adventure series that draws much of its entertainment value from the harmonious dynamics between the three main characters. Especially Hercules, who is so hard on the outside, always provides some particularly delicious moments - especially when he wants to impress Medusa. Whenever the three are together, the viewer is guaranteed to laugh a little before the next exciting task has to be solved or the next fight has to be won.

This often involves the use of visual effects, but they are not always really successful. While the mythical worlds and creatures are still well realized in some moments, the green-screen effects in other scenes can't be that convincing. The series then tries to compensate for this shortcoming with a fast-paced production and exciting adventures. However, this is only possible if one can accept the very free interpretation of the sagas and historical backgrounds. But then it's actually a lot of fun when Jason fights against the Minotaurus, saves little Oedipus, meets the witch Zirze, has to defeat the followers of Dionysos or falls in love with Ariadne (Aiysha Hart), the daughter of the king. The fact that some storylines are very conventionally structured and the dialogues are sometimes very flat, then disturbs only marginally.

"Atlantis" may not be the big litter. But as an entertaining fantasy-entertainment the series sometimes works really well. If you already liked "Merlin" & Co. and appreciate a balanced mixture of adventure, romance, humor, action, fantasy and mysticism, you should definitely give this first season a chance. Worth seeing!

Picture + sound: The audiovisual quality of the series is on DVD on good to very TV level. The picture is very absolute and both the warm colouring and the overall sharpness leave hardly reason to complain. Only in darker moments are slight weaknesses in the detail display and minimal image noise noticeable. The Dolby Digital 5.1 sound transports dialogues, music and sound effects powerfully, but overall somewhat centrally mixed from the speakers. No real revelation, but for a TV series this is perfectly sufficient. Good!

Extras: On the fourth disc there is an entertaining and interesting Making of (approx. 29 min.), which gives a good insight into the production of the series. Gut!

Fazit: "Atlantis" is an entertaining fantasy series that reinterprets familiar myths and legends. The hero Jason travels to a magical world where he meets Minotaurs, Satyrs, Medusa or Oedipus. This is very entertaining especially because of his unequal cronies Hercules and Pythagoras, sometimes also very exciting and even if not all effects can really convince, the show values of the series are also quite neat. Historical accuracy is just as unlikely here as dramaturgical depth. But if you're just looking for nice adventure entertainment, you'll get your money's worth in the 13 episodes of the first season. The DVD is technically well done. As a bonus there is only one Making of, which is quite worth seeing. Recommended