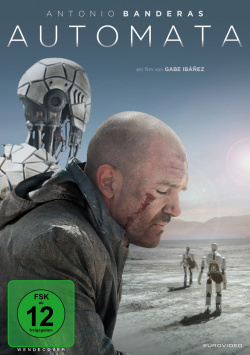 Film: In the not too distant future, solar storms have turned the earth's surface into a radioactive desert. 99.7% of the world's population has fallen victim to this apocalypse. The few survivors can be protected by the Automata Pilgrim 7000. These robots follow a strict safety protocol that allows them to harm a life and modify themselves or other robots. But exactly this seems to have happened with some of the robots now. Jacq Vaucan (Antonio Banderas), an insurance agent commissioned by the manufacturer, investigates some cases in which the robots seem to have developed a life of their own. When he starts the investigation, he discovers a secret that could not only endanger his life...

"Automata" is another film that deals with the topic of artificial intelligence and raises philosophical and ethical questions. Thematically as well as visually, director Gabe Ibáñez obviously makes use of other works like "I, Robot", "Blade Runner" or "Transcendence", whereby there are some scenes with a very high recognition value. But even if you have the feeling to have seen one or the other element of the story before, the movie never seems like a plagiarism or an unimaginative copy. Instead, Ibáñez creates a very special atmosphere in which the exciting story can unfold well.

The first hour is staged really gripping. A little action, a lot of mystery and a depressing post-apocalyptic scenery comfort you over some small lengths. The effects are neat and also the actors all deliver good performances. Towards the end, the philosophical aspect of the story takes the helm, which is at the expense of tension. It's interesting and thought-provoking. But the big showdown, which culminates in a consistent resolution of the story, is really thrilling again. Even if the end was a success all in all, the last thirty minutes would have been good for a bit more speed and excitement anyway.

"Automata" is certainly not a milestone of the genre. Also, the wheel is certainly not reinvented here. But this gloomy vision of the future is always entertaining. The film tells an interesting story in stirring pictures and has good effects despite a relatively small budget. All this makes this post-apocalyptic dystopia an absolutely worth seeing SciFi thriller, which you can forgive for some lengths!

Picture + Sound: The picture of the DVD is absolutely clean and has an extremely atmospheric, somewhat reduced coloration. The high image sharpness allows even smaller details to be easily recognised and the contrast adjustment also leaves a positive impression. The Dolby Digital 5.1 is rather reserved in many moments, but this contributes to the build-up of tension. In some scenes, very effective sound effects are used, which provide a powerful surround feeling. Good!

Extras: As bonus there is only the trailer. Schade!

Fazit: "Automata" interweaves backdrops from films like "I, Robot", "Blade Runner" or "Transcendence" into an exciting dystopia that deals with some ethical questions around artificial intelligence. This isn't new, but it's still very well worth seeing and presented in a thrilling way in many moments. Even if the philosophical part of the story gets out of hand towards the end and this is at the expense of tension, in the end a good overall impression remains. The technical implementation can also book this for itself. Too bad there are no extras worth mentioning on the disc. Nevertheless: Those who like post-apocalyptic SciFi thrillers should definitely take a look here. Recommended