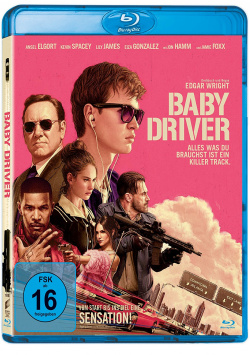 Film: The gangster Doc (Kevin Spacey) owes Baby (Ansel Elgort) a debt. To settle these, he must use his exceptional talent to help Doc and his team with meticulously planned bank robberies. Baby is an excellent driver, who has still lost every pursuer loosely. Constantly accompanied by the appropriate music covering his accidental tinnitus, Baby is a true artist at the wheel. Nothing can distract him, nothing can get him off his track. However, this changes when he meets the waitress Debora (Lily James) and falls in love with her. For them, Baby wants to give up his illegal journeys and finally lead a quiet, normal life. But his feelings also make him vulnerable and that leads to his making mistakes - and these have fatal consequences…

Whoever knows the films of Edgar Wright ("Shaun of the Dead", "Hot Fuzz") knows two things about the filmmaker: He has a fine touch for humour and loves films and music. His works are not only action, horror or fantasy comedies, but always a lovable homage to other filmmakers and their work. He now seems to have perfected this pronounced love of pop culture and his feeling for timing, wordplay and action. Because "Baby Driver" is almost perfect in these points. There is hardly a movie in the recent past that delivers such a perfect choreography between an extremely cool soundtrack and the great edited action sequences. This is not only a great entertainment cinema, but also an impressive proof of craftsmanship.

Wright does not put himself in the same notch as the currently so popular "Fast & Furious" films, but respectfully bows to much more elegant works like "Bullitt"  with Steve McQueen. Even though this time it's a lot more serious than in his earlier movies, the fun doesn't come too short. Some extremely crunchy dialogues and a little pinch of black humor clearly raise the already very high entertainment value. The film can also benefit from the fact that the actors obviously enjoyed working on this fast-paced work. Especially Jon Hamm is simply great.

A real surprise is Ansel Elgort, who you know more from teen movies like "Fate is a bad traitor". Elgort radiates a coolness here that you wouldn't have expected from him at first. But he blends so perfectly with his character that there is no doubt for a second that he is such a perfect and daring driver who (almost) never loses his nerve.

"Baby Driver" proves that action cinema can be served with elegance and brains. The movie is just fun, offers some really spectacular sequences, some good laughs, but also a lot of tension. Even if the finale is a bit too thick, this work with cult potential is clearly worth seeing!!

Picture + Sound: The absolutely clean image of the Blu-ray is determined by the powerful color scheme, which gives the film a very special look that fits well with the atmosphere of the action thriller. The contrasts are well balanced and the image sharpness is also very good. The sound offers a powerful DTS-HD Master Audio 5.1 mix, which makes it really crack when the throttle is pressed or when shots are fired. Very good!

Extras: The extensive bonus material starts with two audio comments. The first is Edgar Wright alone. Enthusiastically, he tells about the making of the movie, whereas he only rarely deals directly with the current scenes. It becomes somewhat more specific with the second commentary that Wright and his cameraman Bill Pope have recorded. If you want to decide for a comment, you should definitely choose the solo track.

The program continues with eleven deleted and extended scenes (approx. 20:28 min.), whereby especially a sequence with Baby as pizza supplier is very amusing and worth seeing. We continue with a look behind the scenes consisting of several features (approx. 45:15 min.). The short documentaries about the origins of the story, the stunts, the driving training, the music, the cast or the choreography can be played in one piece and thus result in a very interesting making of documentation.

In addition there are selected scenes as animatics (approx. 35:42 min.).), four clips from the rehearsals, auditions or make-up tests (approx. 17:03 min.), a music video, the complete storyboard gallery, as well as several trailers and promo clips.

Whoever doesn't get enough, has to go to the Steel Book Edition with bonus disc, on which you can still see a 30-minute making of. This is quite nice, but doesn't offer any real added value to the other features.

Fazit: "Baby Driver" is great fun! The film is perfectly choreographed, offers fast-paced action, a good dose of humor and a damn cool soundtrack. The Blu-ray refines the whole thing with a very good technical implementation, as well as a lot of good extras. If you want even more, you have to go for the Steelbook version with bonus disc, which has a detailed Making of Documentation to offer. No question, this disc is a must have!