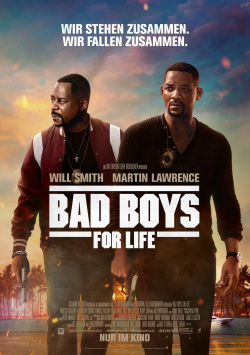 The Bad Boys Mike Lowrey (Will Smith) and Marcus Burnett (Martin Lawrence) are back! But the years have not passed the cops by without a trace. Marcus is determined to retire and enjoy his well-deserved retirement. Mike on the other hand wants to make the streets of Miami a little bit safer in the next years. But before it comes to that, Mike is shot down by an unknown person. After he has barely escaped death, he is looking for revenge. He wants to put the shooter behind bars - or even better: in a body bag - at all costs. But Marcus refuses to stand by his side. And so the former super cop has to join a small squad of rookie cops to track down the culprit - a perpetrator closely connected to Mike's past.

Seventeen years after their last screen appearance, Will Smith and Martin Lawrence slip into the roles in "Bad Boys for Life" that made them superstars of modern action cinema in 1995. Michael Bay, director of the first two parts, is only involved here with a small guest appearance in the film and has handed over his director's chair to Adil El Arbi and Bilall Fallah. They have, however, adopted Bay's visual style to a large extent, so that even after seventeen years there is still a real "bad boys" feeling. Also in terms of brute action and humour, they rely on the tried and tested. However, the whole thing doesn't seem as fast as its predecessors. Especially in the first half there are some scenes that would have worked better if they had been a little shorter.

The fact that the two main characters - and especially Martin Lawrence as Marcus - are always flirting with their age gives a fresh breeze. One of the most amusing moments in the film shows in counter-cuts how Mike sets off for work in his usual coolness, while Marcus enjoys his retirement in the TV chair. But don't worry: "Bad Boys for Life" is not a retirement comedy. Yes, it's a little more relaxed and there are less hectic cuts and more dialogue scenes. But the two directors also let it rip over and over again and prove that especially Will Smith doesn't belong on the action siding.

Straight in the last third the action really gets down to business and the already very solid entertainment value jumps up considerably. And in the end it's clear: The makers have offered the fans (almost) exactly the movie they had to wait for almost two decades. Not every gag works out, the pacing isn't always right, but all in all "Bad Boys for Life" is more than solid old-school action cinema. At the end you're even happy about the fact that there's a little hint in the credits that if you're successful you could go on - but this time maybe with a little less waiting time than last time! Routine and not exactly surprising, but still absolutely worth seeing!