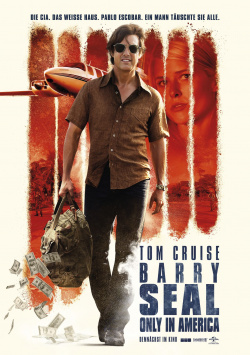 Barry Seal - Only in America

The pilot Barry Seal (Tom Cruise) improved his content in the early 1980s through small smuggling. These won't go unnoticed by the CIA. He is recruited by the agent Monty Schafer (Domhnall Gleeson) to use his talent as a pilot for covert operations in South America. Barry lets himself be convinced, but soon has to realize that the other side also has some lucrative offers up its sleeve. And so he soon flies for several clients and becomes more and more entangled in a mad web of drug smuggling, arms trafficking and covert operations, where at the end of the day only one question seems to arise: Where to put all the money he flies home with?

With "Barry Seal - Only in America" director Doug Liman and lead actor Tom Cruise present another extremely entertaining collaboration after "Edge of Tomorrow". This time, however, they don't tell a fantasy story, but one that - as incredible as it seems - is actually based on true events. Barry Seal, a simple pilot who became one of the richest men in America, really existed. And even if some of the figures and events portrayed in the film have been exaggerated, there are always facts behind them.

The story is a bit confusing even if you know the political background, but that doesn't change the high entertainment value of the film. Liman manages to capture the absurdity of the true events perfectly with a well-balanced mixture of cleverly constructed story, biting humor and some action and to transform it into entertaining entertainment cinema. With a very engaging visual style that leads to an almost perfect 80's look, and an extremely good-humoured leading actor, Liman's staging also comforts loosely over some more tenacious moments.

Tom Cruise plays Barry Seal with a mixture of arrogance, naivety, charm and winking insidiousness that is just fun. Once again it becomes clear that Cruise as an actor is much better and stronger than his reputation. But also the rest of the ensemble can convince away through the bench, even if nobody succeeds in stepping out of the oversized shadows of leading actor Cruise. But in this case that's not too bad, because it fits very well to the inflated ego of the Barry Seal.

"Barry Seal - Only in America" is the perfect proof that fun, humour and ambition are not necessarily mutually exclusive. A really good movie, that also works great as an entertaining addition to the series "Narcos". For this wonderfully absurd piece Portrait of a clever sly cooked up rascal, there is clearly one: Absolutely worth seeing!