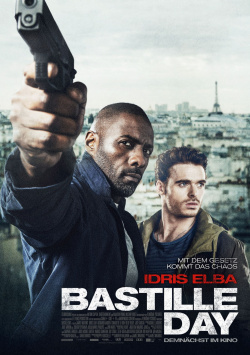 Even a pickpocket should pay attention to what he steals. The young American Michael Mason (Richard Madden) has to learn this lesson in a particularly drastic way when he grabs the backpack of a young woman (Charlotte Le Bon) in Paris. Because there's a bomb in the bag that was supposed to blow up an empty office. But now the explosive device explodes in a crowded place and Michael is targeted by the secret services as a suspected assassin. So it doesn't take long until he runs into the arms of the rough-and-ready CIA agent Sean Briar (Idris Elba). But he quickly realizes that Michael is not a terrorist and that the real masterminds of the attack are still at large - and are perhaps planning something much bigger. Suddenly the agent and the pickpocket find themselves in the middle of a large-scale conspiracy from which they can only get out alive together…

After two successful excursions into the horror genre ("Eden Lake", "The Woman in Black"), director James Watkins now tries his hand at an action thriller with "Bastille Day". The film is solidly staged in terms of craftsmanship. The action sequences are rapidly implemented and just a car chase over the rooftops of Paris provides for some proper adrenaline rushes. In addition, there is the very captivating screen presence of Idris Elba, who manages to fulfill even flat one-liners with extreme coolness. When Elba strikes verbally or physically, the movie has a higher entertainment value than the script actually deserves.

Because dramatically "Bastille Day" doesn't play in the first league now. The mixture of conspiracy thriller, buddy action and heist movie is full of clichés, deep logic holes and very stenciled characters. More than solid average goods are actually not offered. But fortunately, the rapid staging, sometimes loosened up with a little humour, as well as the charisma of Idris Elba can effectively counteract this. Elba and Richard Madden, who became famous through "Game of Thrones", make a good team, which makes for some really entertaining moments. Sure, there's not really anything original about it either. But what the two deliver works very well within the clearly defined boundaries of this genre, which is why a high recognition value and hackneyed phrases are absolutely bearable.

As "Bastille Day" doesn't try to be more than entertaining popcorn entertainment, which wants to offer its target audience a pleasurable visit to the cinema, the film should also be judged exactly under this aspect. Thus, despite numerous justified criticisms and some really bad dialogues, there is a very clear bottom line: Here we deliver what is promised and there is also a clear "worth seeing"!