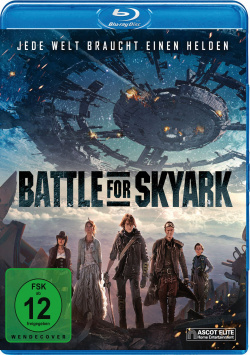 Film: In the not-too-distant future, the Earth has become a contaminated planet whose surface no longer provides a habitat for humans. It is now a world full of mutated monsters from which the surviving humans have fled into space. In SkyArk, an artificial city in orbit, they have built a new society. But space and resources are scarce. Therefore all orphans are banished back to earth. There they found the camp of the fallen and defend themselves with all means against the monsters. To give them hope, their leader Rusty invents the legend of a boy with 13 shadows who would save them and enable them to live in peace. When Rags, son of a rebel, is banished to the earth branded with 13 shameful marks, the children see him as their saviour. He's supposed to help them find the Blue Drop that gives the monsters their strength. But soon it becomes clear that Rags can't live up to his role as a savior...

"Battle for Skyark"the feature film debut of director and screenwriter Simon Hung, is a dystopian vision of the future whose starting point is strongly reminiscent of Niell Blomkamp's "Elysium", mixed with the "lost boys" from Steven Spielberg's "Hook". Some elements of the story, even though it may be borrowed from other movies, and at least at the beginning also the visual realization reveal a certain potential. Unfortunately, Hung can hardly make the most of that. For better effects and more talented actors he simply lacked the budget. And since the movie reveals some big weaknesses, the blatant script flaws also become much more apparent. If you listen to the explanations of the crew members responsible for costumes, equipment or effects in the bonus material, you will notice that a lot of enthusiasm and euphoria was shown here. Hung also deserves credit for having dared to give the story a very uncompromising, gloomy twist in about half of the film.

Although the ambitions are as good as they can be and the hearts and minds of all those involved are tangible, not all weaknesses can be concealed. The fact is that the low budget can be clearly seen in the visual implementation. The young actors are anxious, but remain extremely colourless throughout. Especially main actor Caon Mortenson lacks both experience and charisma to be able to carry the movie. Even his co-stars don't manage to gain some strength from the rather thin dialogues. Moreover, the film never seems to be able to decide whether it wants to be an exciting youth adventure or a dark sci-fi thriller for a rather adult audience.

All this leads to the fact that "Battle for Skyark" can only impress positively to a very limited extent. For viewers between the ages of 14 and 17, who simply want to experience an exciting adventure with young heroes and (rather harmless) monsters and don't yet attach much importance to sophisticated dialogue, originality and great acting, science fiction film offers a certain entertainment value. But otherwise, in view of the many weaknesses, there can be no real enthusiasm, which is why in the end there is only a "limited worth seeing"!

Picture + Sound: Since the film is rather a smaller, inexpensive production, no audiovisual top quality on blockbuster level should be expected. Nevertheless, the picture and sound of the Blu-ray are absolutely convincing overall. The picture sharpness is at a high level and sometimes pleasantly powerful colouring fits in well with the end-time atmosphere of history. The sound is also convincing, whereby the good mixing of the dialogues and some decent sound effects create a harmonious sound backdrop. Good!

Extras: As a bonus there is a short look at "The World of Battle for Skyark" (about 7:11 min.), the trailer, program tips and some interviews (about 16 min.). Okay!

Fazit: "Battle for Skyark" is a dystopian SiFi-thriller with some good ideas, but it suffers from an extremely weak script and a very low budget, which is visible in some parts. The obvious heart and soul that director Simon Hung and his team have put into the film prevents it from degenerating into a completely trivial B-movie-trash, but unfortunately it can't compensate for all its weaknesses either. Younger viewers with low demands on dialogue and acting could be entertained very well. For all the others, however, despite the proper conversion of picture and sound and the short, but definitely worth seeing extras: only conditionally recommendable!