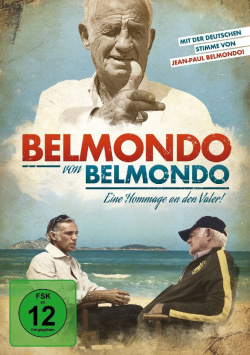 Content: In the 1960s until the late 80s it was hard to imagine cinemas without him: Jean-Paul Belmondo! He was regarded as the great star of French action and comedy cinema, but also made a name for himself in more demanding films like "Außer Atem" or "Elf Uhr nachts" by Jean-Luc Godard. With a lot of charm and power Belmondo lured the audience into the cinemas in droves with movies like "The Pro", "Adventure in Rio", "A Crazy Guy" or "The Ace of Aces". In Germany it became quiet from the late 80's around the actor who found his way back to the stage in his homeland and provided there for enthusiasm. Now, at over 80, Jean-Paul Belmondo can look back on an extremely varied and great career that has taken him to the most diverse places in the world.

Together with his son Paul already Belmondo in the documentary "Belmondo of Belmondo" some of these places. He returns to the scenes of his great cinema successes, telling of the sometimes very exciting shootings and his even more exciting life. On this journey the two men meet numerous companions of Belmond such as Ursula Andress or Alain Delon. Famous friends like Claude Brasseur or Jean Rochefort as well as family members or actors like Jean Dujardin, who were inspired by Belmondos work, have their say. This journey is rounded off by a fabulous career with all sorts of film excerpts and rare archive material such as private Super 8 films or footage from the shooting of his films.

This creates a very extensive, personal and entertaining picture of an exceptional French artist. Critical questions or insights into possible dark sides of the artist should not be expected here. After all, the whole thing is a son's homage to his father. That is, of course, a rather one-sided adulation. On the other hand, what Belmondo has created in his almost six decades of career is such a respectable achievement that there is no room for negative voices either. For cinema lovers this documentary is a must anyway. For when Belmondo reveals in his stories how the work on the stunts was still going on back then - something that one could no longer even imagine in a Hollywood production today - it becomes clear how much international cinema alone has changed in one way or another. But even the meaning of a star is no longer the same as it was in the 60s or even in the 80s. There the name on the poster was enough to lure people into the cinema. Hardly any other star now has such tractive power - and that's somehow a pity.

"Belmondo by Belmondo" is a really worth seeing documentary and also a little piece of cinema history. And that's why not only fans of the French cult actor should not miss this road trip into the past. Absolutely worth seeing!

Picture + sound: The sound is at a good level for a documentary, with interviews, the German voice-over commentaries (for which Belmondos regular speaker Rainer Brandt could be won) and the music setting the tone. Surround fireworks should therefore not be expected. Since the film makes use of many archive shots, the quality of the image sharpness has to be reduced again and again. Here and there there there are also some slight soiling, which is not surprising considering the age of some film excerpts, archive footage of filming and older interview recordings. The current interviews, on the other hand, are pleasing with a good overall sharpness and a harmonious colour scheme. Altogether there is a satisfied one for the technical conversion: Good!

Extras: Unfortunately the DVD does not have bonus material to offer.

Fazit: "Belmondo of Belmondo" is a very entertaining and charming documentary about the great Jean-Paul Belmondo, which not only visits many original locations of his film career, but also lets several greats of French cinema have their say. Rare archive material and the very personal conversations make this film a must for all fans of the actor. The DVD presents the Road Trip in very good picture and sound quality, only bonus material is unfortunately not available. Recommended