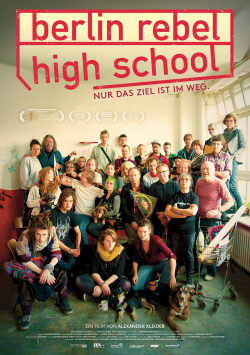 Young people who cannot cope with the rules of normal school life or who fail due to pressure to perform and the grading system often have no prospect of a proper school education. Alex, in his early 20s, is such a young person, just like Lena or Hanil, who is regarded as very rebellious in their village community, who simply never managed to learn properly. What they have in common with many others is that they still want to have a proper degree so that their future is not completely obstructed. Fortunately, there is the Berlin School for Adult Education (SFE). Here there is no director, no grades and the pupils are involved in important decision-making processes, but also have to take care of organisational tasks. This also includes the payment of teachers. It's an unusual concept, but it's been working since 1973 and has produced a number of successful degrees.

Filmmaker Alexander Kleider accompanied some students of the "Berlin Rebel High School" on their way to their Abitur. The result is a very interesting, but also extremely entertaining documentary film. By not only introducing pupils and teachers, but also giving them a deep insight into their everyday lives, it is not only made very clear how and why the unusual school concept works. It also becomes clear why an institution like SFE is really necessary and for some young people an important opportunity for a professional future. The pupils are not only provided with teaching material, but are also trained in social competence. They are not exposed to the usual rules and the difficult competitive pressure, but should learn personal responsibility as well as social behaviour in the group.

Although you may not agree with all aspects of this concept, the film makes one thing very clear: Everyone is different and there is no one school concept that is exactly right for all children. But since everyone should have the same right to education, it is extremely important that the different needs of learners are also addressed at school. We must say goodbye to the ideal of the one perfect school for all. Institutions such as the SFE are definitely a step in the right direction.

It is very interesting to see how committed young people are to struggle to achieve a school-leaving qualification that has been denied them in the more conventional way. At the same time, however, it is also absolutely exciting to learn why the teachers who are not civil servants accept the not exactly lavish salary and the lack of securities in order to teach at the SFE until well into their retirement age. This is really about ideals and preparing students for the right path to graduation. And that makes this documentary a very interesting film, about which you can talk and discuss for a long time, but which is also very entertaining. But there is a very clear one: Absolutely worth seeing!