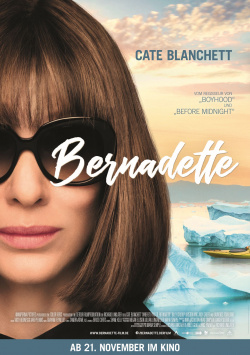 Bernadette Fox (Cate Blanchett) was once a celebrated star architect who caused a stir in the male domain. But in the meantime she has completely withdrawn from public life and moved from LA to Seattle with her husband Elgie (Billy Crudup), a successful IT manager. Here the couple lives with their 15-year-old daughter Bee (Emma Nelson) in a villa in dire need of renovation, whose condition is a thorn in the side of their meticulous neighbour Audrey (Kristen Wiig). When she insists that Bernadette remove the wild blackberry bushes from her property, a chain of events sets in motion that can even take Bernadette to a closed institution. But she decides on a completely different path - and suddenly Bernadette has disappeared…

With "Bernadette" director Richard Linklater has staged an entertaining comedy drama that can score with a mixture of wonderfully bizarre moments, touching scenes and great pictures. All this is carried by a wonderful Cate Blanchett, who as a somewhat quirky woman, who is quickly annoyed by her fellow men and also seems to be overwhelmed with the small tasks of everyday life, is simply great. Blanchett is also the one who saves the movie from some tough moments. Fortunately, these are so rare anyway that they don't attract any further negative attention.

Based on the novel "Wo stecktst Du, Bernadette?" by Maria Semple, Linklater has succeeded in making a film that is incredibly funny without appearing too exaggerated. Even though Bernadette is in principle a very overdrawn figure, she somehow seems real. The same applies to the story, which seems to get a little out of hand at some point, only to reveal that it's long since back on track with a goal to a really nice end. At the end some of the bite that makes the humor so wonderful, especially in the first half of the movie, gets lost. But even if in the last act the laughter muscles are less strained and instead the heart is more targeted, the whole thing works really well.

In short excerpts from a documentary about the architect's earlier work, one learns more about the story of the past that made Bernadette the woman the viewer gets to know at the beginning of the film. With the knowledge of what was one understands also the meaning of the journey that this figure undertakes, much better. This is what makes the narrative of the story so appealing: the audience's view of the main character changes not only because of what she does in the story itself, but also because of what is served in small appetizers about her past. The result is great cinema entertainment for the heart, for the head and above all for the mind. A movie that is fun, but also makes you think in a certain way. Played great, filmed wonderfully and staged captivatingly - that's what it's all about: Absolutely worth seeing!