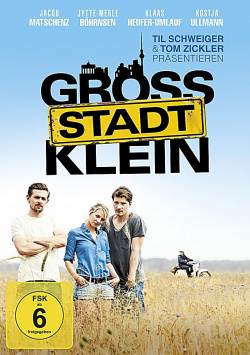 Contents: Ole (Jacob Matschenz) lives a happy life in the country at the northeastern end of Mecklenburg-Western Pomerania. For him, the day is perfect when he can enjoy a relaxed moped race with his buddies and can forget all his worries while sitting at the lake. But the carefree idyll is over when his grandpa Karl (Heinz W. Krückeberg) organizes an internship as a draftsman for a calendar manufacturer in Berlin. It's bad enough Landei Ole has to move to the big city. He is also supposed to live with his cousin Rokko (Klaas Heufer-Umlauf), whom he hasn't seen for 15 years. He isn't too keen on this idea either, which is why the first hours in Berlin are pure horror for Ole. But this changes abruptly when he meets Rokko's best friend Fritzi (Jytte-Merle Böhrnsen). The fun-loving girl immediately turns Ole's head and it seems as if the time in Berlin will be really pleasant after all. But this changes abruptly when Ole receives the news of uncle Karl's death and he drives home to the funeral together with Fritzi, Rokko and his father (Tobias Moretti). Not only old wounds are torn open, also the relationship to Fritzi suddenly goes in a completely new direction - and not necessarily with pleasant consequences...

"GrossStadtklein" is the feature film debut of Tobias Wiemann, who also wrote the script for this comedy. Especially in the first half of the film Wiemann manages very well to work out the likeable characters and the dramaturgical conflicts. A lively game with various clichés about small towns and big cities and the cabaret between Ole and Rokko provide many amusing moments, which are intensified by the obvious joy of the actors. While Jacob Matschenz portrays the slightly naive country bumpkin very sympathetically and lovably, Klaas Heufer-Umlauf convinces as a city dweller annoyed by his cousin. The best laughs in the first half of the film, however, were recorded by Tobis Moretti, who as Rokko's slightly prolapsed father Manni can play out his talent for comedic timing. This good cast is completed by the charmingly crazy acting Jytte-Merle Böhrnsen, who in her very own way makes it easy to understand why Ole lets her twist her head so quickly.

In the second half of the film, however, the whole thing runs out of breath. The well-structured story loses its clear structure and simply doesn't want to ignite as well as it did at the beginning. The film is still entertaining and worth seeing. Nevertheless, the end just doesn't keep what the very good beginning promises. However, Wiemann still has to keep one thing too good: while visually he already clearly orientates himself on the style of his producer Til Schweiger, he finds a much better and more coherent narrative tempo than Schweiger did in his last movies. While his films were always about 20 minutes too long, which was particularly at the expense of timing, Wiemann's direction leads through 90 minutes without any longer lengths. The story wouldn't have given away much more and it's to be credited to Wiemann that he didn't try to prolong the whole thing in a convulsive way.

Even though "GrossStadtklein" isn't a perfect movie and has some weaknesses dramaturgically, Tobis Wiemann as the director reveals a lot of potential here. Anyone who likes small, likeable representatives of the young German comedy should definitely take a look here. The convincing actors and the very amusing first half of the film are reason enough to be able to pronounce this Til Schweiger production a clear "worth seeing"!

picture + sound: The influence of producer Til Schweiger is most noticeable in the visual realization of the film, since the very warm coloring is very similar to that of Schweiger's films. The overall image sharpness is on a good level, only in darker scenes a slight loss of quality is noticeable. The sound is presented in a rather unspectacular Dolby Digital 5.1 mix, which is determined not only by the well mixed dialogues but also by the film music and smaller surround moments. Good!

Extras: The DVD has a very good additional offer in the program. It begins with a cheerful and very informative audio commentary by director Tobias Wiemann and the two actors Jacob Matschenz and Pit Bukowski. In addition there are some amusing outtakes (about 4:51 min.), a worth seeing making of (about 12:06 min.) and an entertaining team movie (about 11:43 min.). A brief insight into the casting (approx. 1:59 min.), impressions from the premiere (approx. 3:03 min.), the trailer and the short film "Action" (approx. 6:18 min.) round off the bonus material. Gut!

Fazit: "GrossStadtklein" is a sympathetic comedy that convinces with good actors and a decent tempo. Here and there the feeling arises that director debutant Tobias Wiemann hasn't quite found his own tone yet and towards the end was a little overwhelmed with the dissolution of his story. But overall an absolutely positive overall impression prevails, which is underlined by the technically well done DVD and the decent bonus material. Anyone who likes young German cinema should definitely take a look here. Recommended