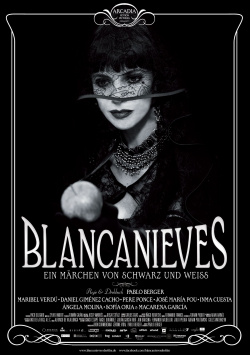 Blancanieves - A Tale of Black and White

Snow White in a different way: In Spain in the 1920s, the acclaimed torero Antonio Villata (Daniel Giménez Cacho) is overjoyed because his beloved wife, the flamenco dancer Carmen de Triana (Inma Cuesta), is expecting a child of him. But the couple's happiness is suddenly destroyed when Antonio is seriously injured in an accident in the arena and Carmen collapses in shock. While the doctors manage to save Antonio's life, his wife dies giving birth to their daughter. Broken with grief and tied to a wheelchair, the torero now refuses to see his daughter, who therefore grows up with her grandmother (Ángela Molina). But when she dies, little Carmencita (Sofia Oria) is taken to her father's country estate, where he lives with his new wife, the nurse Encarna (Maribel Verdú). The girl quickly realizes that Encarna only hates and rejects her. When she has matured into a young woman (Marcarena Garcia), the evil stepmother tries to put her plan to get her husband's money into action. First she pushes Antonio down the stairs and orders her lackey to murder Carmen as well. But she survives the attack and finds care with a troop of small toreros. For Carmen it is the beginning of a very great career - but unfortunately not the end of the murderous intrigues of her stepmother…

The temptation is great to accuse the black-and-white silent film "Blancanieves - Ein Märchen von Schwarz und Weiss" of artistically only swimming in the waters of the success of "The Artist". Filmmaker Pablo Berger did not start shooting his ambitious work until shortly after "The Artist" started its success story. But he started working on this passion project long before that. It took almost ten years for Berger to implement its vision. The result is an unusual fairy tale that bows to great classics of the silent era with numerous small allusions and that wants to show that a good story doesn't necessarily need words to enchant the audience.

These are high ambitions that make one thing clear above all: Pablo Berger and his team worked here primarily with their hearts and with all their passion. And although "The Artist" was very successful, it took a lot of courage to rob a film of all technical finesse in times of digital 3D cinema, to make it look old on purpose and to reduce it to the essentials. With all due respect for the courage of the director and his obvious passion, only the question must be allowed why it was necessary to tell this admittedly original variant of the popular fairy tale about Snow White and the Seven Dwarves in this somewhat inaccessible way.

With "The Artist" this made sense inasmuch as it showed a film world in upheaval that worked excellently as an allegory for the transition to the digital age. Here the silent film concept itself was transformed into an important part of history. This is not the case with "Blancanieves - A fairy tale of black and white". Here the lack of colours and clay is a purely artistic stylistic device, which has its charm at the beginning. But it gets more and more lost in the course of the two hours of running time. Surely, who has a preference for films from the silent film era, for him this Spanish fairy tale is a real pleasure. But more than a small niche audience this Torero Snow White will hardly be able to appeal to.

"Blancanieves - A Fairy Tale of Black and White" has many strong aspects, from the actors to the technical implementation to the sometimes wonderfully bizarre humor. However, his artistic standards also make the work difficult to access, somewhat unwieldy and even a little boring, especially in the middle part. Nevertheless: anyone who loves ambitious European Arthaus food of the unusual kind can confidently embark on a journey into the past with Pablo Berger in several ways.