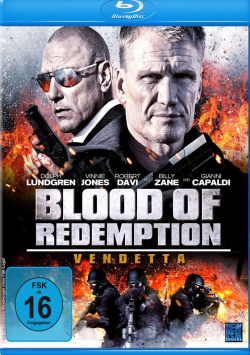 Content: Alex (Dolph Lundgren), called "the Swede", works in Los Angeles as a bodyguard for an influential mafia family. He gets along especially well with Quinn (Billy Zane). One day, however, the family becomes the victim of a treacherous intrigue. Quinn ends up in prison and the head of the family gets murdered. All of a sudden the whole family has lost everything and their adversary Campbell (Vinnie Jones) sets the tone in the city. When Quinn gets out of jail, he's looking for revenge. Since his brother Kurt (Gianni Capaldi) now works for the FBI and his ex Loryn (Jelly Howie) seems to have a new lover, Alex is the only one left to help him with his revenge. But the Swede has already planned his very own revenge campaign...

With "Blood of Redemption - Vendetta" the filmmakers Georgio Serafini ("Game of Death") and Shawn Sourgose ("Premonitions") have delivered an action thriller of the old school. Not only the cast (Dolph Lundgren, Robert Davi) brings back memories of some of the genre representatives of the 80s and 90s, as they existed in masses in video stores at the time. The staging itself also seems a bit old-fashioned, even though the makers keep trying to spice it up with little visual gimmicks in the style of the Guy Ritchie gangster movies. But the fact that the movie as a whole seems a bit old-fashioned isn't that bad. On the contrary. This gives the movie at least for fans of such action B movies a decent entertainment value, which also comforts the somewhat overburdened story and the fact that Dolph Lundgren moves through the action quite sluggishly.

The action sequences themselves are implemented in an appealing way. Even though Lundgren doesn't seem as agile as he used to be in direct duels, as already said, these well implemented scenes are really something to be proud of. Dramaturgically, the movie is a bit overburdened, which makes it well concealed that the story itself is rather thin and also has some small logical holes. But the staging is fast enough and entertaining enough to make you forget some of these weaknesses.

This is not to say that "Blood of Redemption - Vendetta" would be a really good movie. The dialogues are just too flat and the characters are drawn too one-dimensional. Nevertheless, it is a pleasant surprise that the strip offers much better entertainment than one would expect at first glance. If you've enjoyed such B-thrillers before, you'll get your money's worth. And that's why for those viewers who spent a lot of time in the action departments of their main video library in the 80s and 90s, there's a clear one: Recommendable!

Picture + Sound: Like the film itself, the visual implementation is also on a good B-movie level. The image is clean, the sharpness tidy and the coloration a little undercooled. This is all satisfactory, but there is still room for improvement in terms of quality. It is noticeable that the dialogues in the German version sound a bit more powerful, but also much more centrally mixed, while in the English version they seem a bit more harmoniously integrated into the action. Sound effects such as gunfire ensure pleasant movement in the surround range for both audio tracks. Good!

Extras: As a bonus the Blu-ray offers a short look behind the scenes (approx. 11:52 min.), as well as a picture gallery and the trailer for the movie. Somewhat short, but better than nothing.

Fazit: "Blood of Redemption - Vendetta" is a decent action B-movie, which doesn't have any ideas of its own and is a bit overloaded, but still knows how to entertain. Anyone who appreciates typical video rental goods from the 80s will get their money's worth here as well. The Blu-ray presents the film in good picture and sound quality, while the bonus material is quite scarce. All in all no masterpiece, but entertaining genre entertainment of the old school. Recommended for fans!