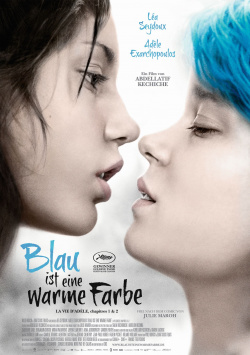 Blue is a warm color

Adèle (Adèle Exarchopoulos) leads a rather unexcited teenage life. She likes to read, talks about boys with her friends and dreams of becoming a teacher. With her handsome classmate Thomas she seems to have found her first love. But Adèle quickly realizes that you feel something. The certain tingling sensation she felt when she saw a young woman with short blue hair on the street or when she was unexpectedly kissed by a classmate. When Adèle accidentally meets the fascinating unknown (Léa Seydoux) again, her emotional world is finally turned upside down. Because the artist Emma triggers an undreamt-of passion in the young girl. What she initially considers to be sexual experimentation soon develops into a solid relationship and great love. It is a relationship in which both women grow closely together over the years and at the same time threaten to develop apart…

With the filming of the award-winning Graphic Novel "Blue is a warm colour" by Julie Maroh, director Abdelatif Kechiche ("Couscous with fish") has hit the nerve of festival juries, feature critics and art lovers alike. The film was showered with hymns of praise in Cannes, which only deserved a perfect masterpiece. Many national and international critics are of the opinion that the film is just that. Of course, such an assessment is always in the eye of the beholder. Nevertheless, such a flood of positive judgements suggests that this love story must truly be an infallible masterpiece.

However, this is only conditionally the case. It's undeniable that the two main actresses deliver great, very courageous and above all absolutely authentic performances. The two women, especially Adèle Exarchopoulos, disappear completely behind their roles and make these fictitious characters tangible and very real characters, to whom an emotional bond can easily be established in the course of the story. The staging also has a very lifelike and intensive effect in itself. The fact that a great love with all its ups and downs is presented so free of kitsch and trivializing dramaturgy is truly a rarity in cinema. This is sometimes not really pleasant to look at, but has an enormous emotional power.

That makes it understandable why so many people use the word "masterpiece" here. But this is hindered by Abdellatif Kechiche's staging, which sometimes seems somewhat narcissistic and unnecessarily protracted. As already said, it can't be denied that the filmmaker knows how to conjure scenes of enormous authenticity onto the screen and to bring out an incredible naturalness and informality from his actors. But as with "Couscous with fish", here again he stretches many rather unimportant moments almost unbearably. Why we should watch Adèle and her family eating for minutes, why the restless camera has to follow the girl on a demo for so long or why a celebration that Adèle and Emma are hosting together has to be shown in real time remains a mystery. Maybe that's in the eyes of some great artists. For others, on the other hand, this is completely unnecessary boredom. This is not to say that these scenes themselves are unnecessary. On the contrary. But they could all have been presented in a much more compressed way without the film losing any of its intensity.

The same applies to the sex scenes, which caused a lot of excitement. Even though they are not the most explicit sex scenes to be seen in contemporary Arthaus cinema in recent years, they are certainly the most detailed. Again, the director proves to have a good eye for aesthetics and naturalness. He shows the act of love between the two women in all clarity, but still doesn't seem voyeuristic. However, it is also true here that less time would have been more.

"Blue is a warm color" is a great and intense, but at the same time also a very bulky and much too tough film, the length of which would not have been dramaturgically necessary and which also cannot be excused as an artistically important tool. For those who like to listen to long, not necessarily meaningful conversations or watch people eat or have sex, this film will surely be the little masterpiece they are so often praised as. But if authenticity is not enough for you to enjoy several lengths as great art, this love story will prove to be a really hard piece for you. And that's why the bottom line is that there is only a "worth seeing"!