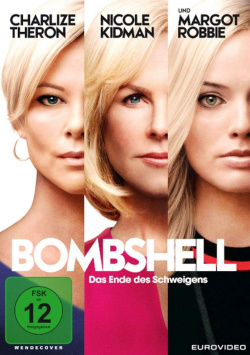 Bombshell - The End of Silence - DVD

Film: She is blonde, sexy and quick-witted: Megyn Kelly (Charlize Theron) is THE figurehead for the news channel Fox News. But soon she has to realize that beautiful legs count more than real journalism. But that doesn't stop Kelly from taking on Donald Trump in the presidential election campaign - much to the displeasure of station boss Roger Ailes (John Lithgow), a close ally of Trump. Although he launches a nasty, misogynist Twitter campaign against the host, the station does not support her. At the same time, Kelly's colleague Gretchen Carlson (Nicole Kidman) refuses to renew her contract when she refuses to conform to the cliché of "TV Barbie" any longer. And the young editor Kayla Pospisil (Margot Robbie) also gets to feel the unpleasant sides of the station's executive floor - even if it means a career advancement for her. When Gretchen Carlson takes on Ailes in public and sues the station's boss for sexual harassment, she gets a lot of headwind. But why do Kelly and Pospisil keep quiet - and for how long?

Based on true events, "Bombshell - The End of Silence" takes a revealing look behind the scenes of the conservative channel Fox News, the mouthpiece of US President Trump. Director Jay Roach tries to unravel the events with a touch of biting satire, obviously based on the films "Vice" and "The Big Short" by Adam McKay. However, he doesn't manage the balancing act between unveiling drama and satire as well as McKay did. In view of the dishonesty that this story reveals and the manipulative reporting with which this station contributes to the division of the country, a little more bite and malice would have been desirable.

Acting, however, there is nothing wrong with the film. The three main actresses are simply great and John Lithgow - hardly recognizable under his mask - also delivers an outstanding performance. Also in terms of make-up effects and equipment are first class, which is especially made clear by the use of original footage. Nonetheless, at the end you still get the impression that there could have been a lot more out of the material. Especially compared to the mini-series "The loudest Voice", in which Russel Crowe impressed as Roger Ailes. This seven-part series makes it clear how much potential there still would have been in the story.

Despite its weaknesses, "Bombshell - The End of Silence" is a good, entertaining and important film, which is worth the effort because of the great actresses alone. A film that makes you think and get angry, but also has a lot of loosening up and humorous moments to offer, without diluting the message of the story. All in all, the bottom line with some small deductions is still enough for one: Absolutely worth seeing!

Picture + sound: The audio-visual realization of the film can convince with powerful colors, a decent overall sharpness and powerfully mixed dialogues. Concerning the sound, it's also positively noticeable that the ambient noises and soundtrack are well coordinated with the dialogues. All in all, there isn't really anything to criticize concerning the technical implementation. Good!

Extras: The DVD has pleasingly extensive extras to offer. The seven-part Making of, which lasts around 80 minutes, takes a detailed look at various aspects of the production - from the origins of the film to the leading and supporting actors, visual design, make-up or even the work of the director. Really worth seeing!

Conclusion: "Bombshell - The End of Silence" is a good, entertaining and important film, which is worth seeing just because of the great actresses. Not without flaws, but at the bottom line it's a work that makes you think and get angry, but at the same time entertains really well. The DVD presents the film in good picture and sound quality and also has some very worth seeing extras on board. For this there is a very clear statement: Absolutely recommendable!