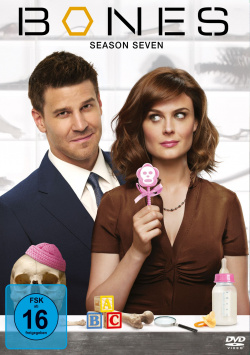 Film: For many years, loving teasing between the forensic anthropologist Dr. Temperance Brennan (Emily Deschanel), called "Bones", and FBI investigator Seeley Booth (David Boreanaz). That romantic sparks were sparking between the two was no big secret. But what Bones revealed at the end of season 6 should have surprised not only Booth, but also many fans of the series: the scientist is actually expecting a baby from the FBI agent. In the seventh season, which is quite short with only 13 episodes, a lot revolves around the offspring of the two. However, neither the final stages of pregnancy, nor the delivery, nor the many demands that a newborn child makes, can prevent Bones from solving tricky cases in her own special way. Also Angela 8Michaela Conlin) and Hodgins (T.J. Thyne) had 6 offspring at the end of season. Her work doesn't suffer, but her private life does. Fortunately, there is still Angelas Papa (Billy Gibbons from the band ZZ Top), who takes care of his grandchild in his very own way.

And so Bones and her team still have enough time and personal freedom to solve some unusual deaths. A murdered designer, a tornado hunter whose passion seems to have become his downfall, a killer who leaves bloody clues at a Lincoln monument for the investigators or a corpse spread over several pacts pose a mystery to the staff of the Jeffersonian Institute in Washington, but thanks to state-of-the-art technology and Bones' ingenuity they are not unsolvable. A personal highlight for the anthropologist is a visit to a film set in Hollywood, where her novel is being transformed into an action blockbuster. And of course a corpse appears here, which was not in the script...

"Bones" goes through some changes in the seventh year. In many series the romantic connection of two main characters often meant the approaching end. From "The Model and the Sniffer" with Bruce Willis to "The X-Files", the (sexual) tensions between the main characters usually made for a very special charm that disappeared when constantly teasing or clashing characters became fixed couples. Bones" is now also exposed to this danger. Since the pregnancy of leading actress Emily Deschanel should not be concealed by putting the actress in wide clothes, as is usual in many other series, or by placing objects concealing her behind her belly, it was necessary to advance her relationship with Booth so drastically. Nevertheless, the couple was not allowed to indulge in too much harmony and to pour sugar icing over their relationship too much. The amusing teasing has remained and still works in this initially unfamiliar situation.

The personal relationships of the characters are an important part of the series, but "Bones" lives of course primarily from the cases the team has to clear up. In this respect, the season has two special highlights to offer. On the one hand there is the episode "The Glamour and Cruelty of Hollywood", which can almost be seen as a parody of the series. How Bones causes chaos on the set of the film adaptation of her novel due to scientific mistakes is extremely amusing and is actually only topped by the completely exaggerated trailer for the film.

Another highlight is the appearance of the killer Christopher Pelant (Andrew Leeds), which culminates in a gripping cliffhanger. The resolution is only available in season 8, but the still very high quality of the series makes waiting for new episodes much easier. Despite some changes and repetitive aspects "Bones" still works extremely well in the seventh year, offers an unbroken high entertainment value and loveable characters, that have grown very fond of their fans over the years. And then, of course, there are the sometimes quite absurd deaths, which are presented here and there with an amusing disgust factor. The only criticism of season 7 is that it has only 13 episodes to offer. If you have already liked the first six relays, you can't get past this box. Absolutely worth seeing!

Picture + sound: The 13 episodes present themselves in a good picture and sound quality for a current TV production. The picture is very clean, has a rich color scheme and an absolutely satisfying overall sharpness, especially in the bright scenes. The sound in Dolby Digital 5.1 pleases with powerfully mixed dialogues and well tuned music. A couple of sound effects and ambient noises provide a good dynamic on the surround channels every now and then. Good!

Extras: Distributed to DVDs 1, 3 and 4, the seventh season also has some nice extras to offer. DVD 1 has a cut scene to offer. On DVD 3 there is a worth seeing Making of to the episode "Der Glanz und die Grausamkeit von Hollywood" (approx. 10:32 min.), as well as a short report from the red carpet of the (faked) premiere to the film, which will be shot in this episode (approx. 3 min.). This is an interview with Angela and Hodgins, who are very proud to have taken on a small - but of course extremely important - role in the film.

The last DVD features an amusing gag reel (approx. 3:52 min.), a cut scene from the season finale and an audio commentary on the last episode of the set. Here screenwriter Hart Hanson and producer Ian Toynton talk about how David Boreanaz did not only as an actor but also as a director in this episode. A quite entertaining comment, which can be recommended to fans of the series.

Fazit: "Bones" returns with a shorter, qualitative but in every respect convincing seventh season. Those who were afraid that the new generation, who announced themselves at the end of the 6th season for Bones and Booth, could harm the series, can be happy that the script writers solved this drastic change with bravura and maintained the good chemistry between the characters. Some outstanding episodes, the exciting cliffhanger and the still well working mixture of suspense and humor make this technically well done season a real must for all fans of the series. Recommended!