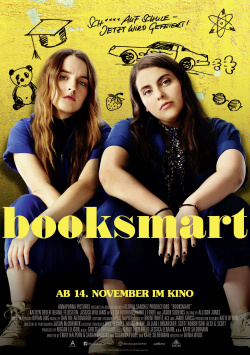 Molly (Beanie Feldstein) and Amy (Kaitlyn Dever) achieved exactly what they always wanted in high school: First class grades and the prospect of studying at an elite university of your choice. They have always kept to the rules, never forgot their homework and certainly never wasted their time at parties. But shortly before graduating, the two of them get a crazy idea: did they miss exactly what makes high school so special? Wouldn't they have made it to university with some fun? And so they make the decision without further ado to let it really crack on the home straight. They want to experience an epic party night - but that proves to be more difficult than expected…

With "Booksmart", Olivia Wilde, who is primarily known as an actress, presents a humorous directorial debut that is supposed to bring a breath of fresh air into the genre of high school comedies. Together with four (!) screenwriters Wilde tells a very conventional story - with the exception that the nerds here are girls and not boys and the fact that one of the girls is also lesbian. No question about it, the movie has some very funny moments and it has the heart in the right place. But at times the whole thing seems to be too much of an effort to show how open and tolerant everyone here is. But especially the LBGTQ-characters are - like all adult characters - too overdrawn to look real and almost become annoying clichés. Yes, our world is colorful, and that's a good thing. But even if you want to show it in a slightly overdrawn, comedic way, you should still be careful not to fall into the cliché trap like you do here.

All of this would not be worth mentioning if it didn't give the impression that the film considers itself better than the average of this genre precisely because it focuses on the girls and is so tolerant. And that's not him. The comedy is funny and charming, but not particularly intelligent. Because the message he conveys is not exactly subtly and sometimes even very flatly served. After all, the great chemistry between the two main actresses saves the whole thing even over some extremely weak jokes.

Grades in the USA, the critics have literally overturned how great, how original and how relevant the film is. Even if I can agree with that in parts, I can't really share the enthusiasm. And that's certainly not because I'm a man. Entertaining? Quite! Funny? Absolutely in some moments! Original? Dramaturgically speaking, absolutely not! And relevant? There's just too much being interpreted into the movie - which is quite intentional, though. I take the film for what it is: An entertaining coming-of-age story for girls who also want to laugh unrestrainedly about raunchy humor. And for that there is a proper one: Worth seeing!