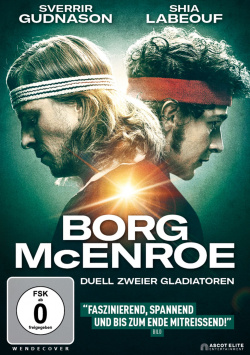 Film: In 1980, after an exciting tournament, two giants of tennis faced each other: On the one hand, Björn Borg (Sverrir Gudnason), who could win the title for the fifth time. On the other side is John McEnroe (Shia LaBeouf), known for his fiery temperament, who wants to push Borg from the throne. At first glance, the two men seem as if they couldn't be more different. But they both have to fight similar demons. The fact that the media artificially exaggerate the duel between the always cool-looking Borg and the spoiled McEnroe also tugs at the nerves of the athletes. And so two rivals face each other, who in the end are the only ones who can understand what the other is going through…

"Borg / McEnroe" is a thrilling sports film in the style of "Rush". Director Janus Metz, who has already made numerous documentary films, traces the path to the "duel of two gladiators" in a thrilling way before the legendary Wimbeldon finale takes place in the last act of the film. Flashbacks interspersed with men's childhood and youth show what drives them and what psychological pressure they are exposed to. Although he is loved by everyone and has won the title at Wimbledon for several years in a row, Borg feels trapped in his life and even thinks of quitting - a thought he made reality a year later. The film makes all of this easy to understand, both through the narrative structure and through the strong play of the main actors.

Shia LaBeouf, who has already made headlines several times even with raging fits of rage, is perfectly cast as a young John McEnroe and can convince both in the dramaturgical moments and in the tennis sequences. Even better is Sverrir Gudnason, who plays the cool, almost undercooled arrogant façade of Borg and what is boiling under it very credibly. Both of them also look very similar to their real role models, which is also very much in keeping with the authenticity of the film.

Like Ron Howard's racing driver duel "Rush", this film also has only one problem to deal with: Although the film tries to portray both protagonists equally, Björn Borg is clearly at the centre of the story and can score more sympathy points than McEnroe. Only towards the end the staging seems a bit more balanced, so that the last scene can unfold its emotional power very well.

"Borg / McEnroe" is a quite conventional, but overall very entertaining and above all excellently played portrait of two really interesting personalities of the sport, whose first Wimbledon duel belongs to the really big games of tennis history. Anyone who appreciates sports dramas based on true events should not miss this film. Worth seeing!

image + sound: The film was not included in the final image and sound quality on the press DVD available to us. Therefore, no rating can be given for the audiovisual implementation at this point.

Extras: The bonus material was also not included on the press DVD and can therefore not be rated. A short documentary, an interview and a trailer have been announced.

Fazit: "Borg / McEnroe - Duel of Two Gladiators" is an entertaining and, especially in the last act, exciting portrait of two exceptional athletes and a tennis duel that has made history. You don't have to be a tennis fan to get carried away by this movie. Despite the rather meager bonus material, there is one very clear thing here: Recommendable!