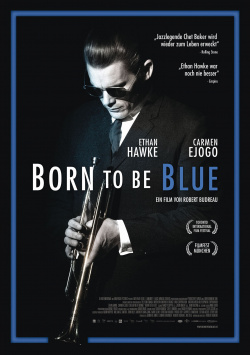 Born to be Blue

1966: Chet Baker, once celebrated as the best jazz trumpeter in the world, is on the brink of an abyss. It still looked as if things were going uphill for him when he was supposed to play in a movie about his life and he falls in love with his colleague Jane (Carmen Ejogo), who plays his former wife. But already on the first date it comes to disaster: Chet runs into his former dealer, who brutally beats him up. In the hospital, the shocking diagnosis is that he needs a dental prosthesis with which he can probably never play the trumpet again. The film project bursts, his former producer drops him. But there's also Jane who gives Chet new courage to live. With her at his side he fights his way back into the limelight - but his inner demons just won't let him go…

"Born to be Blue" is a good, but also quite conventional artist biography. The dramaturgical structure is reminiscent of the countless biopics about musicians who have come to the cinema in recent years. What sets the movie apart from the crowd is the fact that the story of Chet Baker's deep fall and his hard fight back into the limelight is really fascinating. The fact that Ethan Hawke masters the difficult role with bravura also makes the film a very engaging work. But the movie also has to struggle with some not so well done moments. The work itself reminds a bit of jazz: there are very stirring, beautiful passages and then it suddenly becomes very bulky and exhausting.

Director Robert Budreau celebrates some scenes in extreme slowness, which is quite appealing especially in the musical moments, but which always slows down the narrative flow. Moreover, in other, dramaturgically perhaps not entirely unimportant moments, he lacks the time to devote himself more extensively to them. The result is that despite a certain depth, the film ultimately remains too superficial to do justice to a very complex artist like Chet Baker.

Was Ethan Hawke quite successful in catching some of the weaknesses in the production with his finely nuanced play. But even he can't prevent some exhausting lengths and some immature moments from clouding the very positive overall impression. But even if the biopic isn't as fascinating and filigree as Chet Baker's play on the jazz trumpet, the film can be recommended to anyone who is interested in jazz in general and Chet Baker in particular. Worth seeing