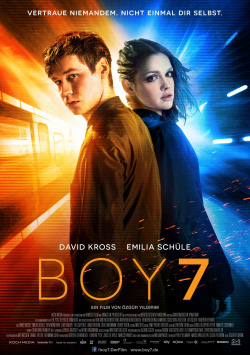 Waking up in a subway tunnel and not remembering anything - what could be worse? Maybe still being chased by the police and not knowing why. This is what happens to a young man (David Kross), who can barely escape before he is handcuffed. Since he doesn't know who he is or where he lives, he has only one clue: the business cards of a restaurant he finds in his pocket. There he discovers a notebook in the toilet, which is apparently his diary. Apparently, he is on the verge of uncovering a massive conspiracy whose masterminds want to silence him at all costs. When a young woman (Emilia Schüle) appears who is dressed like him and has an almost identical burn wound on her left hand, like him, he begins to understand the danger they are both in...

The youth novel "Boy 7" by Mirjam Mous has achieved something very special: it was filmed twice in 2015. Once in the Netherlands, the author's home, and once in Germany. Here director Özgür Yildirim ("Chiko", "Blutzbrüdaz") took care of the exciting mystery story. With David Kross and Emilia Schüle he was able to win two highly talented young stars of German cinema for the leading role. The look of the film is somewhere between traditional paranoia thriller and contemporary dystopia, which makes the film an interesting piece of young German cinema on its visual level alone.

Just at the beginning, Yildirim's staging shows a stirring pace. The viewer is thrown into the middle of the action and, like the main protagonist, is completely at a loss what's going on here. When Samuel finds his diary and the events look back into the past for some time, the pace is slowed down considerably. However, the entertainment value does not suffer from this at first. With an engaging look, a harmonious soundtrack and a little bit of humor, the action remains captivating. When Samuel alias Boy 7 then slowly but surely gets to the bottom of the conspiracy, the tension even increases again.

However, until the story arrives there, there are unfortunately also some tougher moments, under which the tension has to suffer a little. The good main actors can pull this out over and over again, but the overall impression, which is very positive in itself, is a little clouded by such lengths. Especially towards the finale there are some moments that slow down the otherwise fast-paced and exciting action a little. But even if this is one of the reasons why "Boy 7" has become a good, but not very good mystery thriller for the young target group, Özgür Yildirim and his team have to be highly credited for trying to leave the beaten track of German youth film and to stage a thriller that moves on an international level in every respect. Even if this is not quite successful, the attempt alone must be absolutely rewarded.

So this "Bourne" may not be a masterpiece for teens. And maybe a little potential was given away. But all in all, the story, the actors and the visual implementation can be quite appealing, which is why in the end there is a more than well-deserved "worth seeing" despite some small weaknesses!