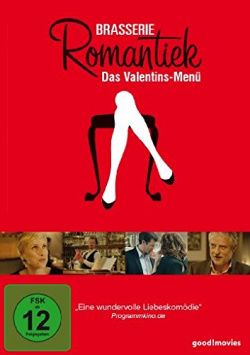 Film: It's Valentine's Day and there's love in the air everywhere. For the small Brasserie Romantiek this is one of the most important days of the year. With a special Valentine's Day menu, lovers are offered a very special evening. In addition, the menu proves to be a perfect opportunity to finally get a second chef's hat from Gault&Millau. The atmosphere in the kitchen is exuberant and everyone seems to be looking forward to this evening. But even before the first course has left the kitchen, it becomes clear that Valentine's Day will be different than planned. Because suddenly the ex of boss Pascaline (Sara De Roo) is at the door and makes her an unbelievable offer. That throws her brother, the cook Angelo (Koen De Bouw), completely off course and the atmosphere in the kitchen heats up dangerously. But even in the guest room there is little to feel of tingling romance. A frustrated wife, an intimidated single man or the Mia destroyed on the ground make sure that the employees of the Brasserie will not forget this evening…

"Brasserie Romantiek - Das Valentins-Menü" tells the stories of different people whose lives will change fundamentally in one evening. The plot is limited to two rooms: the kitchen and the guest room of a small Belgian brasserie. Although some situations are slightly exaggerated, director Joël Vanhoebrouck and the two scriptwriters tried hard to create an atmosphere as authentic as possible. The viewer should get the feeling to visit a real brasserie and to get a glimpse into the processes of a restaurant, which largely corresponds to reality. Because it's this atmosphere that gives the story the special spice that the more conventionally knitted script lacks otherwise.

As so often in movies with an episodic character, some storylines work better than others. For example, the story of the extremely shy Walter, who obviously suffers from a personality disorder, seems a little too exaggerated to be able to function in the long run. But even the better moments, such as the real marital quarrel that develops between the self-obsessed businessman Paul and his frustrated wife Roos, remain too superficial in the end. So the movie offers nice entertainment with some very amusing and also moving moments. But unfortunately it's not enough for more.

What the makers did very well is to show that we are all somehow looking for love. It doesn't matter whether you are married, have just been abandoned, never had a relationship or after many years are still mourning the one great love. It also doesn't matter whether the professional environment is right, whether you live in financial prosperity or rather lead a modest life. Without love there will always be something missing. And the individual stories of the film make this very clear.

So "Brasserie Romantiek - Das Valentins-Menü" is quite an entertaining study about love, a nice mixture of comedy and drama, which is a bit too arbitrary and harmless to leave a lasting impression. That's why there's only one: With limitations worth seeing!

image + sound: The picture of the DVD pleases with a decent overall sharpness and a very atmospheric coloring. Since the black values and contrasts are also well balanced, the mood of the pictures can unfold well. The Dolby Digital 5.1 mix is mainly dominated by the dialogues and is rather unspectacular overall, which isn't uncommon for a movie of this genre and therefore absolutely okay. Good!

Extras: The positive first: With a Making of (approx. 23 min.), edited scenes (approx. 2:34 min.), as well as some outtakes (approx. 4:35 min.) the DVD offers a good extra offer. But now comes the big BUT: The bonus material is only available in original language without subtitles. And this is rather unfavourable for a production from Belgium. Too bad!

Fazit: "Brasserie Romantiek - Das Valentins-Menü" is a quite entertaining study about love, a nice mixture of comedy and drama, which unfortunately doesn't fully exploit its potential and in too many moments comes a bit too harmless and arbitrary to be able to ignite in a really sustainable way. But the film always offers entertaining entertainment. The DVD presents itself in appealing picture and sound quality, but offers the bonus material only in original language without subtitles. That means a deduction of points, but it doesn't change the actual result: Recommendable!