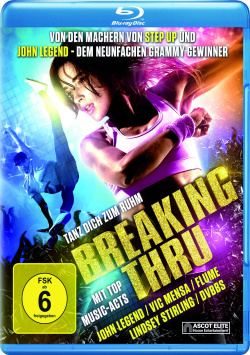 Content: For Cassy (Sophia Aguiar) and her friends there is only one dream: they want to start off big as dancers. Again and again they come up with new choreographies, which they translate into YouTube videos. Stars have often been born here. But the numbers of clicks their videos show are not that intoxicating. The competition is simply too great for that. But then the talent scout Quinn appears, who smells a lot of star power in Cassy. He wants to make them big and promises to invest a lot of time and money in them. And indeed, the professional clips quickly become real YouTube hits. And especially Cassy becomes an idol for many young dancers. But the quick fame also has a price and so the girl alienates herself more and more from her friends. And soon she has to decide if she wants to go further along this path or if she stays true to herself and her friends…

"Breaking Thru" really doesn't win a prize for originality. Anyone who has seen a dance film in recent years - whether "Step Up", "Streetdance" or a similar work - will soon be familiar with the story, its characters and the interspersed conflicts. The staging also shows that there was less budget available, such as the stylish contributions of the successful "Step Up" series. But since movies of this genre, especially in the recent past, don't generally stand out for their originality, but rather want to inspire their target audience with cool dance interludes, attractive actors and an appealing soundtrack, the high recognition value of the story doesn't really weigh negatively.

Nevertheless, "Breaking Thru" is rather one of the weaker representatives of his guild. The dance sequences are worth seeing, but not really spectacular. There was a lot more impressive stuff going on in this genre. The film also doesn't offer first-class acting. This may be due to the fact that the actors are first and foremost dancers and not actors. Considering this, some weaknesses in the presentation can be excused.

There are many things you can criticize about a movie like "Breaking Thru". But in the end only the question counts: Is the target group well served? And the answer to this is: yes! There are better works to choose from for fans of dance films. But if you just can't get enough of this genre and want to see another "From a simple girl to YouTubeSuperstar" story, you'll get your money's worth. And that's why the bottom line is that there's another deserved one: Worth seeing!

Picture + sound: Like the film itself, its technical implementation also offers good average. Image sharpness, colouring, contrast adjustment - all this is just as much on a proper level as the powerfully mixed sound, which especially in the dance scenes accompanied by music has to offer proper movement in the surround range. Good!

Extras: As a bonus there are short featurettes about the cast (about 1:44 min.), the director (about 2:08 min.), the dancing (about 1:55 min.), as well as about the shooting (about 2:19 min.). 15 interviews with actors and crew, as well as 5 minutes of uncommented B-Roll recordings round off the additional offer next to the trailer.

Fazit: "Breaking Thru" is a nice little dance movie, which always has the character of a light TV movie, but at least with nice characters, a nice romance and a few dance sequences worth seeing. The Blu-ray presents the film in appealing picture and sound quality. The extras are scarce and very promo-heavy. But if you like a movie, you can take a look here. For fans of "Step Up" and Co. despite many clichés still worth seeing!