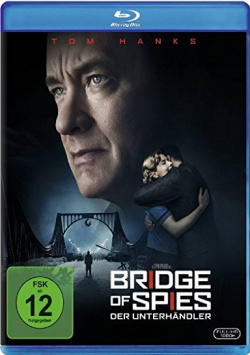 Bridge of Spies - The Negotiator - Blu-ray

Film: USA, in the 1950s: Insurance lawyer James Donovan (Tom Hanks) has been regarded as a first-class negotiator since his involvement during the Nuremberg Trials. Therefore, he is chosen to defend the FBI-arrested Soviet agent Rudolf Abel (Mark Rylance), who has lived unrecognized in New York for years. Despite the justified fears of jeopardizing his reputation, Donovan puts himself to the test in this case, until the hatred he receives from the public also spreads to his family. After the verdict, the case seems closed. But then an American U-2 spy plane is shot down in Soviet airspace and the pilot Francis Gary Powers (Austin Stowell) is captured by Russia. In order to prevent Powers from passing on sensitive information to the Russians, an exchange of prisoners is to be organised: Abel versus Powers. Donovan of all people should travel to Berlin as an independent mediator to organize the exchange. But then a young American student is arrested in East Berlin and Donovan's cards are shuffled anew…

Based on true events, Steven Spielberg has staged "Bridge of Spies", a first-class espionage thriller in which he can once again play out his talent for great entertainment cinema with depth. With the support of a great screenplay by Oscar-winners Joel and Ethan Coen, Spielberg transforms a rather dry political material into a clever cat-and-mouse game, in which elegantly staged moments of tension, great emotions and surprisingly light humour blend in a harmonious way to create a stirring whole. Although there is actually no action in the classic sense and the action is largely determined by dialogues, not a second of boredom comes up. Here Spielberg once again proves himself to be a master of his trade, who could probably also film the telephone book in an extremely exciting way.

In addition to the outstanding script, the gripping staging and the atmospheric visual language of the locations in New York and Berlin, the first-class actors also ensure that "Bridge of Spies" has become one of the best films of the year. Tom Hanks once again delivers an extremely charismatic and at the same time very multi-layered portrayal, which can carry the movie confidently at any moment. Hanks is in perfect harmony with his co-stars, but is repeatedly played up against the wall by the extremely reserved, truly wonderful performance of Mark Rylance. The scenes between Donovan and Rudolf Abel therefore also belong to the best moments of the film, whereby their last encounter plays on the entire emotional keyboard. This is really great cinema.

"Bridge of Spies" offers everything you need for good cinema entertainment: suspense, humour, great actors and dialogues you can hardly get enough of. Moreover, the true backgrounds of the story are so interesting that at the end you get the desire to learn more about James Donovan, his life and work. One of Spielberg's best films of recent years and a must for anyone who appreciates sophisticated entertainment films. Absolutely worth seeing!

Picture + sound: The Blu-ray image is absolutely clean and has a good to very good overall sharpness in most moments, which hardly reveals any visible loss of quality even in darker scenes. Overall, a very good overall impression prevails, which can also be left behind by the sound. The DTS 5.1 Mix is pleasantly lively even in the quieter moments of history. In the dialogue scenes, the actors' voices are transported out of the speakers in a way that is easy to understand, while some sound effects and atmospheric ambient noises ensure that the surround channels also remain in use at all times. All in all there is one more than satisfied: Good!

Extras: Really many extras the Blu-ray unfortunately does not have to offer. Besides a Making of, in which the historical backgrounds are also illuminated (approx. 17:45 min.), there are three further features about the cinematic realization of the divided Berlin (approx. 11:35 min.), about the Lockheed U 2 reconnaissance plane (approx. 8:45 min.) and about the agent exchange on the Glienicker Bridge (approx. 5:42 min.). All in all almost 42 interesting minutes - but it could have been a bit more because of the interesting story.

Fazit: "Bridge of Spies" is exciting, entertaining, well played and grippingly staged. Steven Spielberg delivers with this espionage thriller based on true events one of his best movies of recent years. On the Blu-ray, the work presents itself in atmospheric picture and sound quality, only the extras do not get the best out of it. Nevertheless, for this disc a clear one applies: Absolutely recommendable!