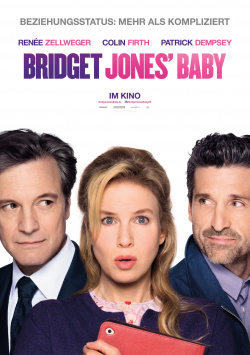 Is there really no Happy End for Bridget Jones (Renée Zellweger)? Whenever she seems to have found happiness, something goes wrong. So she is separated again from her dream man Mark Darcy (Colin Firth) and her days as a successful TV producer seem to be numbered with the arrival of a younger team. There they don't comfort sex with the ex, nor a hot festival flirt with the charming American Jack Qwant (Patrick Dempsey). Quite the opposite: because in the middle of the professional and emotional chaos, the news that Bridget is pregnant also bangs. But who is the father? Mark or Jack? Can Bridget still save her job now? And is she even ready to be a mother? No question about it - Bridget Jones never gets bored!

It took twelve years, but now the most popular single woman in the world is back! With "Bridget Jones` Baby" not only Renée Zellweger is back after a longer absence from the screen. Also Sharon Maguire, director of the first movie, is on board again. Not only bridge inventor Helen Fielding wrote the script, but also comedy specialist Dan Mazer and actress Emma Thompson, who also has a small role in the film. The conditions for another direct hit were therefore very good. But the first few minutes promise little good. When Bridget Jones in her apartment no longer melts into self-pity in "All by Myself", but tries her hand at a rap classic, it's just embarrassing. And also her first encounter with Jack Qwant is not very original.

And so it is to be feared that "Bridget Jones` Baby" has become a sequel for which no one really would have had to wait twelve years. But then something unexpected happens: The movie becomes really funny and surprisingly good. Sure, there are some jokes that are very flat. And it also takes a while to get used to the face of Renée Zellweger, clearly marked by Botox, which lacks the refreshing naturalness that distinguished her in the past. Nevertheless, both the staging and the casual acting of the actors convince with the wit and charm that made the first movie so successful.

Some dialogues are just wonderfully funny and reveal a pleasantly clever word joke. But also when it comes to slapstick, Bridget Jones' cheerful fat-jumping is a lot of fun. But with all this the romance doesn't miss out either, so that viewers don't only get something to laugh about, but also a little bit of something to languish for. Altogether it can be said that part 3 is not quite as successful as the first album, but it is a lot better than part 2. And so it can be rightly said that Bridget Jones has returned in top form after all these years. And that's why everyone who loved the first movie shouldn't miss this wonderful sequel. Absolutely worth seeing!