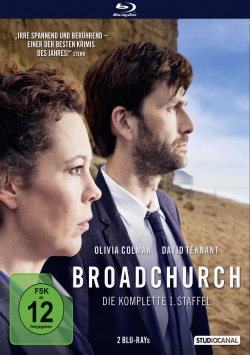 Film: A terrible tragedy lays a dark shadow over the small coastal village Broadchurch: at the foot of a cliff the body of 11-year-old Danny Latimer is found. For DS Ellie Miller (Olivia Coleman), who has just recovered from the shock of losing the promised promotion to her new colleague DI Alec Hardy (David Tennant), this news is particularly terrible. Because Danny's parents Beth (Jodie Whittaker) and Mark Latimer (Andrew Buchan) are not only her neighbours but also good friends. It gets even worse when the evidence becomes harder that the boy did not die in an accident but was the victim of a crime. Together with the narrow-minded and extremely closed Alec Hardy, Ellie now has to search for Danny's murderer in a circle of friends and acquaintances. And the closer they come to the terrible truth, the more the so far peaceful and solidary village structure is shaken to its foundations by mutual suspicions, rumours and slander...

"Broadchurch" by Chris Chibnall is undoubtedly one of the best crime thriller productions in Great Britain in recent years. The story may sound more conventional. The fact that the viewer is not only following the police work, but is also shown what effects the crime has on the victim's family and the entire village community, is also known from other series such as "Commissioner Lund". And yet the 8-part first season never seems like a predictable plagiarism, but can captivate with a captivating atmosphere, excellently drawn characters and surprising twists from the first to the last minute.

Somerset and Dorset. The locations are picturesque and pretend to be a deceptive idyll that is gradually dismantled. In addition to the actual crime, the work of the press plays an important role. Revelations, which should remain private, are brought to the public. This reveals that the former peace and cohesion in the community was extremely superficial and sometimes extremely hypocritical. Mutual suspicions, rumours and defamations spread, dark secrets are revealed and in the end life in Broadchurch will never be the same again.

The exciting story is not only carried by the atmospheric images, but also by the very good ensemble. Olivia Coleman is perfectly cast as a cheerful policewoman, who almost seems a little naive in her good nature and whose view of the world is gradually destroyed. No less good is David Tennant, who can completely detach himself from his "Doctor Who" image after just a few moments. His DI Alec Hardy is a misanthrope marked by professional and personal defeats, who in the case of Danny Latimer sees the possibility of rehabilitating his reputation and silencing his inner demons. Between these two completely unequal investigators there is a very special dynamic, which is intensified by the use of pleasantly subtle humor. But also the rest of the cast delivers first class performances, first of all "Harry Potter" janitor David Bradley as local kiosk owner with a dark past or Jodie Whittaker as grieving mother who has to process some other disturbing news besides the death of her son.

Naturally the wheel is not reinvented here. "Broadchurch is not a revolution of the genre. But it is an extremely exciting, entertaining and excellently staged contribution that once again proves what an outstanding quality contemporary television can have apart from reality shows and docu-soaps. If you like convincing crime food from Great Britain in all areas, you will quickly become addicted here and can hardly wait for the release of the second season. But there is a very clear one: Absolutely worth seeing!!

Picture + Sound: The colouring is extremely atmospheric, whereby the somewhat undercooled tones capture the oppressive mood of the story very well. The picture sharpness is on a good to very high level for a current TV series. Even in gloomy scenes smaller details come into their own. The 5.1 DTS-HD MA Mix is also pleasantly atmospheric, with the voices sounding very directionally mixed. Ambient noises such as wind and sea noise, as well as smaller sound effects, ensure that the surround channels also get something to do. Good!

Extras: On the first disc there is an entertaining audio commentary on the first episode with David Tennant, director James Strong and producer Richard Stokes as well as a very interesting look behind the scenes (approx. 25:23 min.). This making of offers a pleasantly ad-free view of the production, but should be viewed only after the last episode to avoid spoilers.

Disc 2 also has an audio commentary on board. In this case, James Strong, actress Olivia Coleman and series creator Chris Chibnall talk about the stirring season finale. There are also some edited scenes from the individual episodes to be seen here (approx. 25:36 min.). Good!

Fazit: "Broadchurch" is undoubtedly one of the best British crime thriller productions of recent years. Atmospherically filmed, intensively played and grippingly staged, the story of a murder case is told that will lastingly change the dynamics of an entire coastal town. A great series that can pack its punch to the last second with slow tempo, subliminal humour and shocking twists. The Blu-ray presents the eight episodes in very good picture and sound quality and also has bonus material worth seeing and hearing on board. But there is a very clear one: Absolutely recommendable!