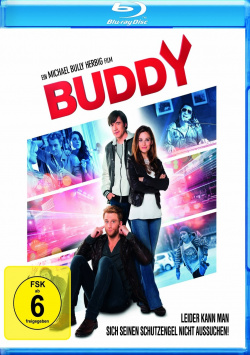 Film: Bully is back! Four years after "Wickie und die starken Männer" Michael Bully Herbig has finally taken a seat on the director's chair again to stage a great cinema comedy. In contrast to his earlier films, however, this one is not based on a well-known template, neither on a sketch from his "Bullyparade", nor on a cartoon series. Rather, he dares to create a completely independent fabric that is not only a little more mature, but also much more romantic than "The Shoe of Manitu" and Co.

At the centre of "Buddy" is Eddie (Alexander Fehling), heir to millions, who is convinced that he can lead the perfect life. He can only throw money around, party one party after the other and get every woman he wants into bed. The fact that he is currently maneuvering his deceased father's company into bankruptcy and driving his image completely up against the wall doesn't seem to bother him much. But help approaches, because one day the arrogant party stallion gets his guardian angel Buddy (Michael Bully Herbig), who wants to help him to finally get his life under control. In return, Buddy wants to set him up with Lisa (Mina Tander), a single mother who takes care of the elderly. But how can you play Cupid if you're only thought of as a hallucination? And so Buddy first has to make sure that Eddie believes that there are guardian angels like him...

"Buddy" starts very fast, whereas the humor in the first third concentrates on very simple slapstick. There is no subtlety to be felt here at any moment. In this part of the film, music, facial expressions and gestures are so hard at making the audience laugh that the opposite is more likely to be achieved. The comedy would not have needed the badly exaggerated absurdities at all. Because if the gags aren't served with a wooden hammer, the movie works really well and at times is even the best Bully has ever delivered. Even if the story isn't filled with fresh ideas and unpredictable surprises, the staging can convince with a lot of charm, good timing and a very well harmonizing cast.

This is especially Alexander Fehling ("Goethe!", "Wer wenn nicht wir") who proves that he can not only convince in dramatic films, but also shows a great talent for comedic material. And also in the more quiet and romantic moments of the comedy the actor leaves a really positive impression. Apart from Fehling, Bully himself plays a subordinate supporting role, but his sympathetic charisma, which makes the comedian, actor and filmmaker so popular with his fans, is strong enough that the whole film can profit from it. Finally, Mina Tander proves to be a very charming object of desire after "Maria, ihm schmeckt`s nicht" as well, whereby she also gets the opportunity to prove her humoristic skills every now and then.

But apart from some less successful jokes and little hangers, "Buddy" actually only has one problem: he differs too much from his predecessors. Even though this has to be seen in a very positive light, as Michael Bully Herbig as a filmmaker reveals a clear development, this could still have been the reason for the rather weak box-office performance. After "Der Schuh des Manitu" or "(T)Raumschiff Surprise" by Bully, the fans expect a certain kind of humour, which they only get here to a limited extent. So anyone who approaches "Buddy" with the wrong expectations could be disappointed. But if you expect a simply likeable comedy with some slapstick, some nice guest appearances, good-humoured actors, a very good visual realization and with a lot of heart, you'll be served really well here. After the bumpy beginning a really nice comedy, which absolutely deserves the conclusion "worth seeing"!

Picture + Sound: Michael Bully Herbig always understood how to make his movies look "big". And it's no different with Buddy, either. The camera work and the editing are on an international level, which is also harmoniously accentuated by the good technical implementation of the Blu-ray in home cinema.

Extras: Even though Bully has given his fans more bonus material on previous home cinema releases, the yield on the Blu-ray is still quite good. Besides the amusing outtakes (approx. 3:06 min.), a greeting from Bully from the set (1:55 min.) as well as the teaser and trailer for the movie - which is also all included on the DVD - the Blu-ray exclusively also has a detailed and really good making of (approx. 40:52 min.) to offer. Gut!

Fazit: With "Buddy" Michael Bully Herbig shows a clear development as a director. After a somewhat bumpy beginning with too many silly things, the whole thing becomes a really beautiful romantic comedy, which has a lot to offer besides many good laughs also a lot of heart. The Blu-ray is technically well implemented, the bonus material is clear, but worth seeing. All in all this is enough for a very clear one: Recommendable!