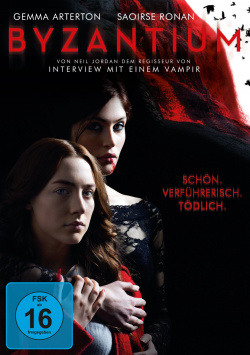 Contents: Clara (Gemma Arterton) and her daughter Eleanor (Saoirse Ronan) have been on the run for many years. Chased by their peers, the two vampire ladies must change their identity again and again and cover their tracks. For in the eyes of the Brotherhood of the Blood Drinking Immortals, the two women are an abnormality to be destroyed. In the old Hotel Byzantium in a small seaside resort the two of them could live in safety for some time. But while Clara tries everything to offer herself and her daughter a future without fear and escape, Eleanor is trapped deep in her past. So much so that she can no longer keep the experiences of the last 200 years to herself. But sharing her life and the secret of her immortality could have fatal consequences...

With "Byzantium" director Neil Jordan returns to the bloodsucking genre almost twenty years after "Interview with a Vampire". There are also some clear parallels between the two movies. The two works have in common the sometimes macabre-poetic visual language, but also the fact that a vampire in the present tells of his past and his transformation. Otherwise, however, "Byzantium" goes its own way. The bloodsuckers here aren't vampires in the classic sense. Their transformation takes place in a completely different way than one is accustomed to from Dracula and its companions. There are also no fangs, no fear of crosses, garlic or sunlight. There is only immortality and the desire for blood.

Although this sometimes flows by the liter and even heads roll, "Byzantium" is more of a drama than a horror movie. Despite some very exciting moments, quiet scenes and the difficult relationship between Eleanor and Clara dominate the action. But the very strong leading actresses and the atmospheric staging prevent the film from becoming a noble bore. Although there are only very few really fast-paced scenes, the movie has a solid basic tension, which also carries the whole thing through the more lengthy moments.

The narrative style that oscillates between past and present might seem a bit confusing to some viewers, though. Because Jordan only reveals the past of the two main characters and the great mystery of the mysterious brotherhood in droplets, the attention of the audience is required at all levels of the plot, if you don't want to lose the blood-red thread at some point. But if you pay even a little attention, then it becomes apparent that the script adaptation of the play, on which "Byzantium" is based, is quite cleverly constructed. It may be that the very fact that Moira Buffini - author of the play and the screenplay version - interprets the vampire myth in a completely different way contributes considerably to the positive overall impression of the story. But also apart from that, this elegiac horror story is told in a very engaging way and also stylistically it is a worthy successor of Jordan's "Interview with a Vampire".

Who appreciates nobly filmed Arthaus horror, who places more value on dramaturgy than on bloody effects, and who can get involved with the carried and interlaced narrative style, will be rewarded with a well-played vampire fairy tale of a slightly different kind, immersed in atmospheric images. But there is a clear one: Worth seeing!

Picture + sound: The sometimes beautifully morbid images come into their own thanks to the good visual conversion. While the image sharpness is on a good to very good level, the colouring leaves a particularly positive impression with its slightly artificial atmosphere. The contrast and black balance are also convincing and there are no noticeable blurred or distorted images. The sound is dominated primarily by the dialogues, the atmospheric music and some subtle ambient noises. The surround channels are used noticeably here and there, but otherwise serve to transport a rather subliminal threatening sound backdrop into the home cinema. Good!

Extras: As a bonus the DVD offers 32 minutes of uncommented B-Roll footage from the shooting (without subtitles) as well as extensive promo interviews with the director and his actors (about 37 minutes). Gut!

Fazit: Mit "Byzantium" director Neil Jordan returns to the bloodsucking genre almost twenty years after "Interview with a Vampire" and delivers one of the most unusual vampire films of recent years. Somewhere between horror and arthouse, between artistic aspiration and exciting entertainment, "Byzantium" offers great pictures, convincing actors and an interesting story. Only the somewhat confusingly nested narrative style stands in the way of a thoroughly successful pleasure. Nevertheless, there is a clear one for the technically well implemented DVD: Recommendable!