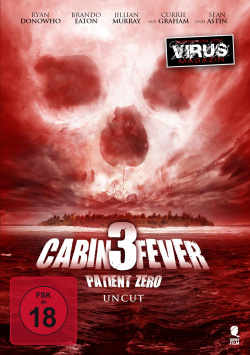 Contents: Before Marcus (Mitch Ryan) marries his fiancée Kate (Claudette Lali) on a Caribbean island, his brother Josh (Brando Eaton), his best buddy Dobs (Ryan Donowho) and his best girlfriend Penn (Jillian Murray) kidnap him with a yacht for a very special bachelor party. On a small, lonely island the four of them want to let the sod off once more. But unfortunately the island is not abandoned at all, there is a secret research laboratory here. And in this Mr. Porter (Sean Astin) is trapped, the first patient of a constantly spreading epidemic, who seems to be immune against the deadly virus. While the doctors desperately try to produce a cure with the help of Mr. Porter, the carnivorous virus continues to spread on the island and does not stop at Marcus and his friends...

With "Cabin Fever" Eli Roth had delivered a small genre pearl in 2002. Old School Horror paired with some humor, very bizarre interludes and well-done disgust effects have quickly turned the story about a carnivorous virus into a cult movie for horror fans. In 2009 the sequel was added, but only a few fans of the original liked it. Record gags, exaggerated disgust inlays and a very trashy implementation led to the fact that hardly anyone wished for another sequel. But it's still coming into the shops now - and that's a good thing. In terms of quality, "Cabin Fever 3: Patient Zero" is far superior to its unsuccessful predecessor.

First of all, director Kaare Andrews takes a much more straightforward approach than Eli Roth in the original. While an ironic undertone was quickly noticeable there, this is completely absent in the third part. As a result, the film gets lost in very worn out genre clichés at the beginning. The characters are drawn in an absolutely stencil-like way and the dramaturgy is structured in a very predictable way. But as soon as the friends are delivered to the island and exposed to the virus, the fun really starts for the viewer. Because not only that it's getting disgusting now and the Special Effects Team is getting to their best form when it comes to Gore. Now Andrews also shows the humor that led to some very memorable scenes in the first movie. The climax is an absurdly brutal duel that literally goes to the bone.

Zwar the whole thing never reaches the cult character of the original, as the staging is still very straightforward even in such moments and relies on the bizarre moments inspired by David Lynch, which Eli Roth incorporated into his film. Nevertheless, "Cabin Fever 3: Patient Zero" is a very well done horror-pleasure after a somewhat bumpy beginning, which skilfully continues the tradition of the first part. And in the end, the makers also built in a good twist, which points to a fourth part, which is already in planning. Anyone who liked Roth's first work and can overlook the many clichés at the beginning will certainly get their money's worth here. Worth seeing!

Picture + Sound: The picture on the DVD looks very clean and pleases with a good overall sharpness that can usually be maintained even in the darker scenes. Particularly positive, however, is the powerful colouring, which allows the many bloodshed here to come into its own in very strong red. The sound presents the dialogues very centrally mixed, but also has numerous sound effects to offer, which provide pleasant dynamics in the surround range. Good!

Extras: Apart from the trailer for the film and further program tips, the DVD unfortunately has no bonus material to offer.

Fazit: After a catastrophic second part, "Cabin Fever 3: Patient Zero" is a much more worthy sequel to Eli Roth's cult film from 2002. Although the whole thing is much more straightforward than the original, it also offers here and there some moments of rather weird horrors. Bloody and entertaining, this is the third chapter in the "Cabin Fever" series, which will soon be followed by another sequel. She can come after this successful part with pleasure. Recommended!