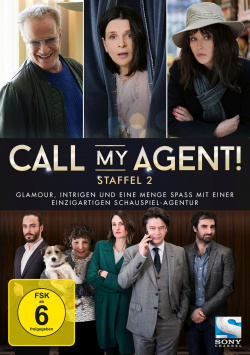 Content: For the employees of the acting agency ASK (Agence Samuel Kerr), the time of fear seems to be over: after the death of founder Samuel, the end for the renowned agency threatened, now with Hicham Janowski a solvent investor is found. The joy that the future of the employees is secured for the time being does not last long, however. As it turns out, Janowski's methods do not exactly correspond to what one could call team spirit. In order to be successful, he plays colleagues off against each other and does not shy away from using unfair means. Especially with Andréa he always comes into conflict, which has unexpected consequences. But these aren't the only (unpleasant) surprises waiting for the agents under their new sponsor…

The French success series "Call my Agent" takes a wonderfully biting look behind the scenes of the film business. In the turbulent everyday life of an acting agency, oversized egos, vanities and dark secrets are revealed - and not only by the actors. The special thing about the series is that numerous greats of French cinema play themselves here - or overdrawn versions of themselves. Of course, this reminds a bit of the series "Extras" by Ricky Gervais (who doesn't know the comedy about the everyday life of an extras, should definitely watch the episode with Daniel "Harry Potter" Radcilffe or the one with Kate Winslet!). However, "Call my Agent" seems to be more firmly anchored in reality.

In addition, the series is never out for the big laughs, but rather captivates with a subtle, satirical joke that is embedded in an action that sometimes shows more serious moments. What makes the series really worth seeing, though, is the fact that the actual protagonists, as the employees of ASK, are really interesting and strong characters, with whose stories you simply get excited. This prevents the guest appearances of prominent starts from degenerating into a gimmick that should carry the series alone.

Season 2 features a great Juliette Binoche, a wonderful Fabrice Luchini ("Das Schmuckstück"), the charming Virginie Efira ("Birnenkuchen mit Lavendel") or "Highlander" Christophe Lambert. In six stirring, extremely entertaining and at times wonderfully ironic episodes, together with the great main ensemble, they make sure that "Call my Agent" has again become a really outstanding series in its second year, which is addictive after two episodes at the latest. Absolutely worth seeing!

Picture + sound: In terms of picture and sound quality, the DVD conversion of the series is on a good to very good TV level. The colours are harmoniously mixed, there is no significant blurring or even picture soiling to be discovered and there is also no reason to complain about the contrast tuning. The Dolby Digital 5.1 mix is relatively unspectacular, but the dialogues - and that's what matters here - sound pleasantly powerful from the speakers. Good.

Fazit: "Call my Agent" is also in the very good second season again a successful mixture of satire and drama, of stirring soap and biting comedy. Not only do a few greats of French cinema make fun of themselves again, the actual protagonists are also consistently developed further. Entertaining entertainment on a high level, which is only missing some bonus material on the good DVD implementation. Nevertheless the following applies: Absolutely recommendable