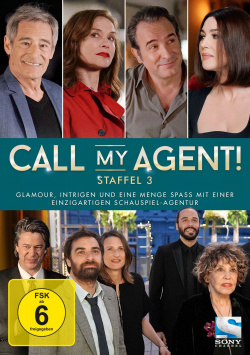 Content: These are turbulent times for the employees of the acting agency ASK (Agence Samuel Kerr). Although investor Hicham Janowski saved the company from bankruptcy, the future is anything but secure. The pregnant Andréa, who had applied in New York but did not get the job because of her pregnancy, also knows this. Now she has to fear for her clients, who want to snatch Matthias under the nail as soon as she is on maternity leave. And Hicham's intrigues and hostilities become enough for him to reconsider his position at ASK. And when actress Isabelle Huppert makes a double booking, this could lead to the agency's final exit…

The third season of the successful French series "Call my Agent" also disenchants the beautiful appearance of the film industry in a wonderfully biting and subtle way. The stories of the agency's employees and their relationships to each other are consistently spun on. This makes sure that you never get the feeling that the series is treading water, even though the concept hasn't changed much since the first episode. The restrained humor also works very well, which is served absolutely unerringly, but which also has enough room for the more dramatic aspects of the individual storylines.

Thanks to the fact that the characters are drawn so multi-layered and interesting, the guest appearances of prominent French acting stars lend the whole a very special touch, without the actual protagonists being played into the shadows by them. In season 3, Jean Dujardin, Monica Bellucci and Isabelle Huppert are among those who are honoured. Especially Dujardin is a wonderful actor who exaggerates the term Method Acting a little bit. But it's to be highly credited to all the stars that they play themselves with a good portion of self-mockery and take their profession seriously in a loving but also biting way.

All that makes "Call my Agent" also in the third season enormously worth seeing again. And after the turbulent events of the six episodes, you only wish for one thing: more of them! Therefore, the following applies again: Absolutely worth seeing!

Picture + Sound: Compared to the first two seasons, there are no significant changes in picture and sound quality. The colour scheme looks very natural, there are no disturbing blurs or even picture soiling and there is also no reason to complain about the contrast tuning. The Dolby Digital 5.1 mix is relatively unspectacular, but the dialogues are mixed in a way that is easy to understand. The ambient noise here and there also provides some movement in the surround range. Good!

Fazit: "Call my Agent" lives also in the third season from the self-ironic guest appearances of French acting greats (Jean Dujardin is simply wonderful), but also from the magnificently drawn characters within the acting agency ASK. The new episodes consistently drive the story forward and in the end leave a great desire for more! The DVDs of season 3 are technically on a good to very good level again. Only bonus material is searched in vain in the third attempt. Nevertheless, the bottom line is clear: Absolutely worth seeing!