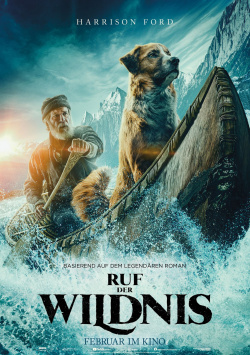 Call of the wild

After dog Buck is kidnapped from his beautiful home in California, he finds himself in cold Alaska. Here Buck has to torture himself through the wilderness as a sled dog before he meets the loner John Thornton (Harrison Ford) after a serious injury. He cares lovingly for the dog and between the two a deep bond develops. But when John incurs the wrath of a fanatical gold-digger (Dan Stevens), it becomes extremely dangerous for the old man and his faithful companion…

"Ruf der Wildnis" is based on the legendary adventure novel by Jack London. Director Chris Sanders has directed an adventure film for the whole family, which boasts of being a mixture of live-action and animated film that integrates computer-generated animals photorealistically into the action. Buck was not impersonated by a real dog, but was played by Hollywood's most famous movement coach Terry Notary. And this is where the film's great weakness is revealed. Notary is a master in his field, no question. Nevertheless, his movements always seem imitated, a little too artificial. Yes, dogs make movements like Buck - but in a different way. Moreover, despite all the technical perfection, you can see that the animals - as well as some landscapes - are not real. And that takes away much of its charm. </Another problem of the film is its story. Especially at the beginning the story seems to be episodic and later she can't decide whether to focus on John, who is torn from his grief and loneliness after a tragic loss by Buck, or on the dog and his search for his destiny. Figures appear, which then disappear again very quickly, while the actual main characters are thus given time to develop. Pity. </p>

"Ruf der Wildnis" can also score with some well realized sequences, which should be thrilling and exciting especially for younger viewers. And Harrison Ford is just fine as an old recluse. Unfortunately, the same cannot be said for Dan Stevens, whom I usually hold in high esteem. His character is way too overdrawn, which is why he doesn't really look threatening, but rather ridiculous. All in all, this Jack London movie is not a total failure, but unfortunately it's also not the great adventure film it could have been. For slightly older children and for viewers who like classic adventure fabrics and don't mind a somewhat artificial look, definitely worth seeing!