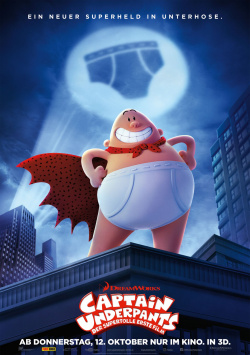 Georg and Harold are the very best friends. Not only do the boys draw comics together in their tree house, they also use every opportunity to play tricks on their school - much to the displeasure of the nasty director Mr. Krupp. When he finally has enough evidence to prove their pranks to his friends, they are threatened with separate classrooms - the beginning of the end of any childhood friendship. It can't be allowed. In their desperation, Georg and Harold even try to hypnotize Mr. Krupp and turn him into their invented superhero Captain Underpants. And indeed, this crazy plan succeeds. But the boys didn't expect the consequences. But it doesn't get really dicey until the crazy scientist Professor Poopypants shows up and a real superhero is needed to stop him…

"Captain Underpants - The Superb First Film" is a weird animation adventure based on the popular book series by bestselling author and illustrator Dav Pilkey. Director David Soren ("Turbo") and his team have staged a film that seems like a long homage to toddler toilet humor. Pee-pee, butt, poo-pee and poo-pee - how funny these terms are. And you're almost inclined to avoid the animated comedy just because of that. But in fact the whole thing is much more amusing and the humor is a bit more subversive than it seems at first sight.

Just the first half can comfort with weird ideas, amusingly cut sequences and playful animations over the somewhat flatter jokes. To see how Georg and Harold desperately try not to be transferred to different classes is very funny. Especially when the idea of what that might mean for their friendship is over the top, it makes for some really good laughs. Even the first clumsy appearances of Captain Underpants are pure good-humoured cinema and score with an almost anarchic realization.

When Professor Poopypants appears, the entertainment value clearly decreases. The humour is now becoming more and more infantile and the production lacks the charming bizarreness that made the beginning so worth seeing. And at some point, the figure of Captain Underpant is really getting on your nerves. Still: Even though there are some weaknesses and some gag seems childish, "Captain Underpants - Der supertolle erste Film" is a lot of fun. Georg and Harold are two adorable bully boys who you like to watch doing nonsense. And in spite of all exaggeration the real friendship between children is very nicely represented here. That may not be super great, as the title promises. But the movie is definitely worth seeing!