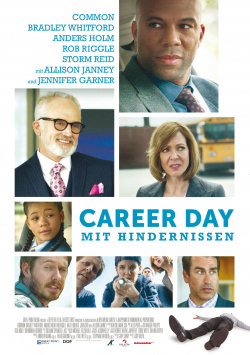 It's going to be a big day at a school in Los Angeles: All parents will come to tell the children about their jobs. But just today a gardener lies dead in front of the school building. The rector (Allison Janney) is completely overwhelmed with the situation and tries to keep the discovery of the body secret. But this is by no means the only problem that could turn this day into absolute chaos. A just fired father (Common), who could embarrass his daughter (Storm Reid) in front of her whole class, an unhappily in love boy and a teacher with suicidal thoughts make sure that this career day will be remembered for a long time…

"Career Day with Obstacles" is the directing debut of actress Judy Greer, who won a great ensemble for the comedy. Even small supporting roles are cast with top-class stars such as Keanu Reeves. With the script also an actor makes his debut, in this case Gary Lundy, who was seen in the cult movie "Donnie Darko". Its turbulent history consists of numerous different strands, which are finally brought together in a grand finale. The individual stories are full of good ideas. But the execution is neither in the script itself, nor in the staging really successful.

Greer's direction lacks any sense of comedic timing. Rather, she often just lets her actors jump hysterically through the scenery. Or she relies completely on the dialogues, which are unfortunately not as funny and mature as Greer and Lundy intended. That's not to say there aren't any really funny moments. But they are never pursued consistently. This is also because the movie can never decide whether it wants to be a deep black comedy or a harmless comedy.

If Greer dares to be a bit more evil and abysmal, then the whole thing works quite well. Unfortunately, however, she repeatedly steps on the brakes in the decisive moments, so that the action ripples rather irrelevantly, instead of offering really biting laughs. "Career Day with obstacles" is never really bad. But the movie just doesn't manage to grab the audience and entertain them well. And that's why here auhc there is only with very clear restrictions just such a "worth seeing"!