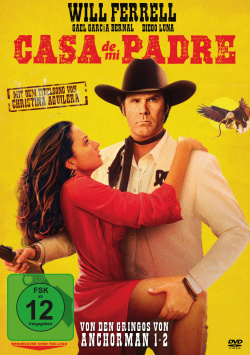 Contents: Although his father (Pedro Armendáriz Jr.) repeatedly makes it clear that he considers him a failure, Armando Alvarez (Will Ferrell) has always stayed on his family's farm in Mexico. But all the hard work didn't help. The farm is heavily indebted and the existence of the entire Alvarez family is at stake. Armando's little brother Raul (Diego Luna), who has made a career in the USA, is supposed to help pay off the debts. But when he returns to the farm together with his fiancée Sonia (Genesis Rodriguez), Armando soon realizes that his brother is just a dazzler who can't be expected to help much. And so it's up to him to save the ranch. The fact that he has to mess with the powerful drug boss Onza (Gael Garcia Bernal) and then also falls for the beautiful Sonia doesn't make things any easier...

With "Casa de mi Padre" Anchorman" makers Will Ferrell and Adam McKay, together with director Matt Piedmont, have staged a strange and wonderfully trashy homage to Mexican Western and Latin American soap operas. They even went so far as to shoot the film completely in Spanish, whereby Ferrell's very clear accents alone create a certain comic effect. Of course, this is completely lost in the German dubbed version. But even without this aspect, there are still enough other reasons to laugh about this parody.

Bad backdrops with painted backgrounds or model-making cities, amusing cut errors or completely exaggerated clichés always ensure a good mood. But also the exaggeratedly stiff dialogues and the probably most absurd sex scene of the last years make "Casa de mi Padre" a wonderfully silly pleasure. And when the film suddenly stops to inform the viewer about a mistake of the second cameraman in an extremely long text fade in, or when the action in a psychedelic dream sequence degenerates, fans of the very special humor of Will Ferrell get their money's worth.

Surely this absurd Western Soap Farce is even less suitable for the masses than "Anchorman" or "Ricky Bobby - King of the Racers". However, even though the jokes are already very silly or are so bizarre that only a few viewers will be able to get a glimpse of them, the movie as a whole is a lot of fun. One of the reasons for this is the fact that you can tell how much fun the actors had in impersonating such exaggerated characters. Especially Gael Garcia Bernal obviously enjoyed playing his comedic talent as a mercilessly evil villain.

The good-humoured performance of the actors, some really gorgeous jokes and the extremely bloody and lead-laden finale help to console some hangers-on and humoristic pipe-benders. Nevertheless: in order to find "Casa de mi Padre" really funny, there should be a weakness for comedy of a more peculiar kind. But if you also like the smaller comedies of Will Ferrell, you should definitely take a look here. Worth seeing!

>Picture + sound: Apart from minor intentional errors, such as deliberate editing errors, the Blu-ray image convinces with a good image sharpness, a very warm, somewhat overstylised colouring and well-tuned contrasts. The DTS-HD MA 5.1 Mix sounds very lively, especially in the leaded finale, where the surround channels are used well. The dialogues, on the other hand, seem very centrally mixed and are somewhat less harmoniously integrated into the German version than in the English version. Good!

Extras: Besides a short interview with Pedro Armendáriz Jr., who died shortly after the shooting, the Blu-ray also has the trailer for the film, a proper promo-making of (approx. 15:43 min.), as well as some very amusing cut scenes (approx. 22:34 min.). Good!

Result: "Casa de mi Padre" is a wonderfully absurd Western-Soap parody, which with all sorts of absurdities, covered wooden play, deliberate cutting mistakes and the probably weirdest sex scene of the last time provides for some really good laughs. If you like the humour of Will Ferrell, you should get your money's worth again. The Blu-ray of the movie is technically well done and the bonus material has some very amusing cut scenes to offer. Recommended