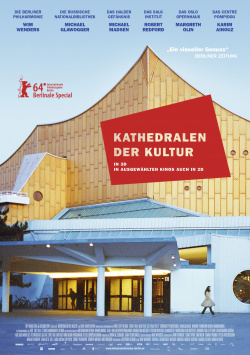 Six international directors have teamed up for a very special 3D project. In "Cathedrals of Culture" each of them portrays a very special building: Wim Wenders leads through the Berliner Philharmonie, the Austrian Michael Glawogger ("Whores` Glory") through the Russian National Library in St. Petersburg, the Dane Michael Madsen visits the Halden prison in Norway and Robert Redford presents the Salk Institute on the coast of California. The award-winning Norwegian filmmaker Margreth Olin shows the Oslo Opera House from its most fascinating side and Karim Aïnouz dedicates his contribution to the Centre Pompidou in Paris.

Each of the directors gives his episode his very own signature. However, the basic idea always remains the same: to bring the buildings to life. They are intended to tell the viewer their own story and open up perspectives that would otherwise be impossible for the viewer. And the creators of this ambitious project have also fully succeeded in achieving this goal. The 3D camera movements through the architecturally, historically or socially exciting buildings are sometimes really spectacular and highly fascinating.

Nevertheless it has to be said that the quality of the individual contributions varies considerably. Sometimes it is the musical background that is very exhausting and distracting. Then the decision to let the building speak in the ego form takes some getting used to. Again and again in such moments the feeling arises that the pictures here would have been enough to speak for themselves or that a more neutral off-commentary would have been more beneficial for the whole thing. Certainly, Wenders, Redford and others did not want to stage a conventional documentary here. The aim was to leave the purely fact-based narrative perspective and create a completely new view of and into the selected buildings and complexes. But in some moments the filmmakers with their artistic ambitions simply stand in the way of the desired effect.

That doesn't seem really serious when the six episodes are viewed individually. As an almost three-hour movie, however, the nerves of the audience are strained very much. The fantastic pictures can only counteract this to a limited extent. "Cathedrals of Culture" is an exciting, fascinating and worth seeing project, that is beyond question. But as a complete work, the whole thing is also somewhat tough and exhausting, which is why this cinema version can only be recommended to those viewers who are equally interested in powerful, but also somewhat bulky programme cinema fare and architecture. But then also applies without reservation: Worth seeing!