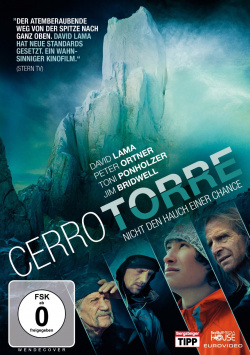 Cerro Torre - Not a hint of a chance - DVD

Film: The 3000 meter high Cerro Torre in Patagonia is often described as invincible. Nevertheless, climbing prodigy David Lima and Peter Ortner will venture the daring task of freely climbing the legendary compressor route. Lima wants to be the first human to conquer the Cerro Torre without any aids, just equipped with hooks and rope. To achieve this you need not only a lot of courage, but also perfect preparation and above all the right weather. And this threatens to cause the already difficult company to fail again and again. There are big setbacks, followed by a first abort. But David Lima and Peter Ortner are not that easily beaten...

"Cerro Torre - Nicht den Hauch einer Chance" is a fascinating sports and nature documentary that not only inspires with breathtaking pictures. Also the story told here is really exciting. Everything begins with the legendary story of the first ascent by Cesare Maestri and Toni Egger in 1959, when Egger died. To date, it has not been clearly proven that Maestri really did climb the summit, as he claimed. In the following decades, the Cerro Torre has repeatedly claimed victims, but has also produced very special success stories. The film derives its appeal from the fact that it not only tells the story of David Lima's spectacular free climbing attempt, but also allows other climbers to speak about the exciting history around this mountain.

The documentary is particularly intense when the nerves of the participants are shattered and the mood is tense enough to tear them apart. Then the audience feverishes even more with Lima and Ortner and literally clings to their armchairs during the climbing scenes. The fact that director Thomas Dirnhofer incorporates into his film not only interesting and thrilling scenes, but also scenes that loosen up the atmosphere, increases the entertainment value of "Cerro Torre - Nicht den Hauch einer Chance" noticeably. This way the film will not only be absolutely worth seeing for climbing freaks and extreme sports enthusiasts. Even viewers who may not necessarily be interested in documentaries are well entertained here. It is true that the images on the television lose a little of their power and intensity compared to the large cinema screen. However, the documentary can also fully unfold its rousing effect in home cinema. And there can only be one possible evaluation for that: Absolutely recommendable!

Picture + sound: The picture of the DVD presents the documentation in a good audiovisual implementation. The image is absolutely clean, the sharpness of the image is very high in the quieter shots, while in the blurred shots there are slight pull-back effects and minor blurring. The colour scheme is very authentic and underlines the good overall impression of the image quality. The sound is available in a Dolby Digital 5.1 mix, which is dominated by the comments in many scenes, but occasionally also provides an atmospheric surround feeling through well-captured ambient noises. Good!

Extras: As a bonus the DVD has a short but informative making of (about 7:22 min.), some webisodes about the production (about 15:35 min.), as well as the trailer and statements by director Thomas Dirnhofer (about 2:37 min.), David Lima (about 3:44 min.) and Peter Ortner (about 3:16 min.). A worth seeing addition to the main film.

Fazit: "Cerro Torre - Nicht den Hauch einer Chance" is a gripping documentary, which not only captivates all climbing freaks with spectacular pictures and a thrilling story. Exciting, entertaining and interesting - not only lovers of documentaries can access it with confidence. The DVD presents the film in good picture and sound quality and the bonus material is a good supplement to the main film. But there is a deserved one: Absolutely recommendable!