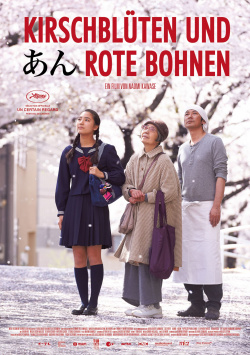 Without any passion Senatro (Masatoshi Nagase) prepares Dorayaki every day in his small snack bar in Tokyo. The money he earns by selling the Japanese pancakes filled with a sweet bean paste is just enough to make a living and pay off his debts. But then the old Tokue (Kirin Kiki) enters his life and offers to help him prepare the Dorayaki for a small salary. At first Senatro refuses, but after trying their bean paste, all the taste buds explode in his mouth. He realizes that Tokue has a very special talent that could help him get some momentum into his store. And indeed, the new Dorayaki quickly become an absolute hit. During the careful preparation of the paste, a close friendship develops between the two, which is soon put to a severe test. Because the old woman has a secret that can endanger not only her own future, but Senator's as well. When this comes to light, she has to make a difficult decision…

"Cherry blossoms and red beans" is the film adaptation of the novel of the same name by Durian Sukegawa. Director Naomi Kawase ("Still the Water") has adequately transported the poetic model onto the screen. Her film is a quiet, unagitated drama about friendship, exclusion and a world where passion and sacrifice seem to have no place. In very long shots the filmmaker leads the two unequal protagonists to each other and thereby creates a very special friendship, while she indulges in the tasty pictures of the production of the bean paste. As Senatro finds his lost passion again and Tokue finally sees himself as part of society again, a band of mutual respect and affection unravels between the two.

However, with the success come the envious ones who want to cut this band up again. The moment Senatro finds love for his profession, he has to make compromises that would immediately destroy this newly acquired passion. And that's just to make others profit. And Tokue, as so often in her life, is to be ostracized. The story poses the question of whether a few moments of happiness and respectful friendship are enough to change the view of life to such an extent that one does not allow oneself to be thrown to the ground by such setbacks.

The whole thing happens with an extreme calmness that one must be able to get involved with. The story is relatively straightforward, so that on the surface it would not have taken two hours to tell. But those who do not let themselves be deterred by the narrative tempo will recognize that here, in the truest sense of the word, the power lies in the calm. This way, the audience is able to bond well with the somewhat brittle characters, look behind their façade and realize what this friendship actually means to them. This also makes the ending of the movie extremely emotional and powerful. "Cherry Blossoms and Red Beans" may not be a movie for the masses. But if you appreciate Japanese dramas of a particularly quiet kind and want to have moving stories told in beautiful pictures, you shouldn't miss this work. Worth seeing