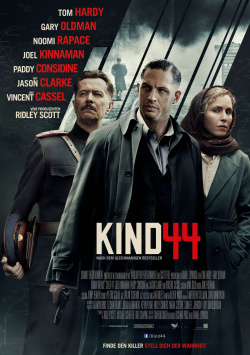 Moscow in 1953: In the Stalin era there are officially no crimes here. Even intelligence officer Leo Demidow (Tom Hardy) believes in it and fully supports the communist ideals of his country. In this way he has succeeded in securing a satisfactory life for himself and his family. But when the child of a friendly fellow officer (Fares Fares) is cruelly murdered and the act is declared an accident by Major General Kuzmin (Vincent Cassel), Leo's view of the world begins to falter. A short time later another child's body is found, whereupon Leo starts the investigation even against the will of his superiors. He is then demoted and sent into exile. But even there the case won't let him go. Somewhere a brutal killer is up to no good and Leo wants to stop him before more children fall victim to him. But with this he puts himself and his wife Raisa (Noomi Rapace) in great danger...

"Kind 44" is based on the first volume of Tom Rob Smith's trilogy of novels about Soviet secret police Leo Demidow. Inspired by the true case of the serial killer Andrei Tschikatilo, the book tells an extremely exciting criminal story, which director Daniel Espinosa ("Easy Money", "Safe House") has now tried to bring to the screen. Unfortunately, the project failed despite excellent cast and atmospheric visual language. The problem with the film is that it actually tells two stories: the actual criminal case and the story of a man who has to choose between his loyalty to the Stalinist system and his will to reveal the truth. Espinosa places too much emphasis on the political aspect of history. For most of the time the search for the serial killer is completely pushed into the background, before it is rashly resumed and brought to a close in the last act.

This creates a somewhat unbalanced overall picture, in which it is also noticeable that many of the characters remain too superficial to tie the viewer to the action despite the dramaturgical weaknesses. The fact that the movie has been immersed in dreary and dark colors for more than two hours of its running time should also be a huge pain in the hearts of some people. The real problem is that "Kind 44" isn't a bad movie in itself. Some scenes are enormously captivating, the actors - especially Tom Hardy and an extremely nasty Joel Kinnaman - deliver very good performances and the work of the outfitters and the cameraman is also first-class. And yet over long distances there is simply no real tension to be found.

The first edited version of the film is said to have been much longer. And maybe it would work better as a three-hour two-parter on TV, because besides the superficial character drawing there are also some distinct holes in the story. But in this version the bestseller filming can only generate little enthusiasm. If Espinosa had concentrated more on the hunt for the serial killer and if he had tightened up the fight against the regime Leo has to fight out a little and integrated it better into the action, then "Kind 44" could have become an excellent cinema thriller. But the whole thing looks like two immature films, which only fit together to a limited extent and which are simply not exciting enough to be able to captivate over the entire running time.

Who knows the book template and can fill the gaps in the story will perhaps not notice the weaknesses of this production so clearly. If you can concentrate on the good actors and the well done aspects of the movie, you might also experience a thrilling movie night. Otherwise however applies: only with reservation worth seeing!