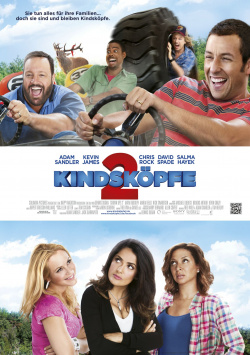 After Lenny Feder (Adam Sandler) was reminded at a meeting with his former high school buddies Eric (Kevin James), Kurt (Chris Rock) and Marcus (David Spade) how wonderful life was in his small hometown, he and his wife Roxanne (Salma Hayek) decide to move with the children of L.A. to the idyllic province. Lenny now enjoys spending more time with his family there again. And also that he and his buddies can regularly just be an unrestrained child's head. But the idyll is suddenly destroyed when the four friends are shaken up and strongly humiliated by a couple of half strong college boys around Poser Andy (Taylor Lautner) during a visit to their favourite bathing spot. Lenny realises that the times of his youth are finally over and that he is slowly being put on the sidetrack. That Roxanne wants another baby now of all times is completely inconvenient. But also the rest of the clique has to admit that it's finally time to take responsibility and be a good role model for the offspring. And that?s not possible as a child?s head - or maybe it?

Three years ago the "child?s heads" made the cinemas insecure with infantile humour and deep-rooted jokes and thus apparently found exactly the taste of the audience. A worldwide income of almost 300 million dollars made the comedy one of the most successful Adam Sandler films of recent years. A sequel was a quick decision, especially as the actors, who were good friends with each other, had a lot of fun being silly in front of the camera and getting paid for it. And what once worked well will also lure the audience into the cinemas in droves a second time.

And so Sandler and his permanent director Dennis Dugan didn't even bother to create something like a real story in "Kindsköpfe 2", which holds the countless burp, farts and vomit jokes together. Surely, the inclined Sandler fan is offered exactly what is expected. Nobody who solves a movie ticket for an Adam Sandler comedy expects intelligent pun, subtle humor or claim in any form. Finally, the film makes clear where the humorous journey is heading in the first few minutes, in which Sandler is urinated by a wild stag. But even if the comedy never tries to be more than an infantile fun film, it's a pity that the makers don't have more to offer than faecal humor, oh so funny hairstyles and grimaces, which successfully defy any touch of subtlety.

What the viewer is offered here, unfortunately, quickly becomes tiring. When Eric is always giving his popular Rülpser-Nieser-Furz-Triigestirn to the best, even the most undemanding fan will only get a tired smile out of it. And the fact that the masters of creation become drooling idiots at the sight of a tightly filled décolleté is funny at most once. The exaggerated Poser behavior of the conceited college boys is really funny in the beginning. But at some point, that too was dead. Here the unimaginativeness of the script becomes very clearly noticeable.

Part 1 was already no intellectual author cinema. Nevertheless, the film still had some charm. There's hardly anything left of it here. "Kindsköpfe 2" is a clown where the few good gags are buried under a whole bunch of body fluids, borderdebil characters and flats of kalauern. Loyal Sandler fans won't mind that much, they want to see exactly that. But anyone who thought that "Jack & Jill" or "Der Chaos-Dad" had reached the humorous low point, will be taught a "better" in a painful way. Therefore: only for hardcore fans of the actors worth seeing!