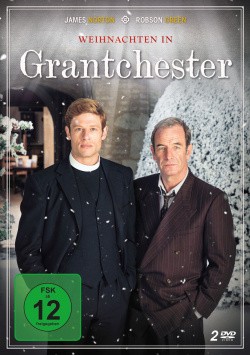 Content: It is very christmasy in Grantchester. And it almost looks as if the young vicar Sidney Chambers (James Norton) finally has reason to be happy. His great love Amanda (Morven Christie) has separated from her husband and now lives with her aunt. Whenever Sidney and the highly pregnant Amanda see each other, it becomes clear how much the sparks are spraying between them. But deep down, the vicar knows that there can be no common future for them - no matter how much he enjoys the short moments of happiness. But there is hardly any time for this emotional chaos, because a groom reported missing is found dead - the wedding rings are placed in his mouth. Geordie Keating (Robson Green) is shocked, as the act has clear parallels to an unsolved murder case a few years ago. The main suspect of the time is again the focus of the investigation this time. But this case still has a few surprises in store for the investigators:

Friendly Christmas! The Christmas special of the popular British crime series "Grantchester" doesn't offer a homely tranquillity, but rather an exciting murder case for Sidney as well as the sad realization that there can be no happy future for Amanda. Not in the time in which they live and not in the circumstances in which they find themselves. But even though this lies like a dark shadow over everything, in the end something like a Christmas mood comes up. But that's exactly what makes this series so successful: There are often very serious, dark or exciting moments, but also an infectious lightness and wonderful British humour. This mix just works really well.

And that in this special episode as well. The case itself offers classic crime thriller entertainment, but it is certainly constructed in a captivating way. Like Sidney and Geordie, it's all too easy for viewers to be lured onto the wrong track, and as obvious as the actual resolution may be, it's as surprising as it is in the end. So if you are wondering whether it is worth buying this DVD for a single episode that lasts less than an hour, you can say so with a clear conscience: Yes, it's worth it.

Because it's an absolutely solid episode of a very good crime series that allows your characters to evolve all the time. And that's why this Christmas special, which still works very well after the 24.12., is clearly one of a kind: Absolutely worth seeing!

Picture + sound: As with the first two season speakers, the technical implementation of this special for a TV series is also completely convincing. The picture is clean, the overall sharpness is at a good level and the colouring - very important for a Christmas special - radiates a pleasant warmth. The Dolby Digital 5.1 mix is rather unspectacular, but transports the dialogues out of the speakers in a way that is easy to understand. But there is a festive one: Gut!

Extras: Unlike the relay boxes there is no bonus material for this special.

Fazit: The Christmas special of "Grantchester" doesn't look festive at all, as Sidney and Geordie have to solve a murder shortly before Christmas, which has clear parallels to an unsolved case. An entertaining episode that is a must for all fans of the series. The DVD is technically well done, only bonus material was not included this time. As an introduction to the festival and to shorten the wait for season 3 this DVD is absolutely recommendable!