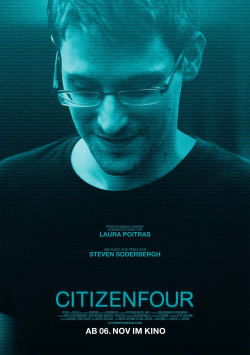 When the filmmaker Laura Poitras received a first encrypted e-mail from a certain "Citizenfour" in January 2013, she had no idea what explosive information this contact would still give her - information that would lead to worldwide attention, political tensions and heated discussions. By now everyone knows the right name for "Citizenfour": Edward Snowden, who worked for NSA as a private service provider for four years, hid behind this pseudonym. During this time, Snowden came across evidence of massive surveillance of Internet and phone data, not only from US citizens. Rather, it was a worldwide surveillance of secret services, politicians but also of private individuals. After Citizenfour and Poitras had communicated for several months via encrypted e-mails, they agreed on a meeting to be held in Hong Kong.

Together with journalist Glenn Greenwald, the filmmaker and the computer specialist met in a hotel room in which the full extent of this global scandal would be revealed in the following eight days. Poitras captured these eight days with her camera. As the final part of her trilogy about the USA after September 11th, this fateful meeting will now bring her to the cinemas as "Citizenfour". The result leaves a somewhat ambivalent impression. There is no question that documentation is important. No matter if you think "Whistleblower" Snowden is a hero or a criminal, his revelations raise many fundamental questions, which have to be discussed urgently and therefore should be called into the collective memory of the citizens again and again.

In addition it is very exciting to watch how a person puts his freedom and maybe even his life at risk for his conviction. This insight lends a very depressing atmosphere to the filmic reappraisal of the eight-day meeting in Hong Kong. So the documentary almost looks like a classic political thriller in the style of "Die Unbestechlichen", whereby the whole thing is even more explosive and important in this case, as what is revealed here really concerns everyone. In this respect, it can certainly be said that everyone should also look at "Citizenfour". On the other hand, it has to be said that the staging itself is a bit sluggish, which makes it hard to give the movie the attention it deserves.

One might argue that Snowden's revelations have enough relevance to stir up the audience and captivate them over the almost two hours of running time. However, many of the facts presented here are already known and the movie gets its explosiveness primarily from the fact that as a viewer you can be part of an event that somehow seems a bit unspectacular, but which in the end has tremendously far-reaching consequences. Poitras shows this very nicely through the excerpts from news broadcasts or Senate hearings, which enclose the actual core of the film. So at the end it becomes really clear what Snowden actually achieved.

"Citizenfour" is a very explosive, stirring and relevant movie. Stylistically it's good, but it also has some lengths through which some viewers, as interested as they may be in the subject matter, will surely have to struggle not to doze off for a short while. Nevertheless: one of the most important political documentations of the year and therefore also: absolutely worth seeing!