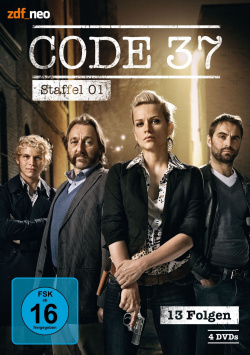 The crime series "Code 37" ran successfully for three seasons on Belgian television between 2009 and 2012. Now this very exciting series has finally made it to Germany. The structure of the series is rather conventional, but the sometimes very gloomy cases that the department for sexual offences has to deal with alone ensure that "Code 37" stands out from the mass of European crime fiction. Another reason is the extremely interesting main character. Hannah Maes is apparently hardened and can stand up to the prejudices of her male colleagues with a lot of bite and coolness. At the same time, however, she is also a very vulnerable woman who fights a trauma from her past and finds it very difficult to open herself up to other people.

This multi-layered character is very well played by Veerle Baetens, who became known to a wider audience in Germany last year through her leading role in the surprise arthouse hit "The Broken Circle". Baetens succeeds very well in convincingly embodying the different facets of her character and thus making the detective commissioner so interesting and worth seeing despite some small clichés. She is supported by a really good team, which is not only sympathetic because of the scripts, but also because of the well chosen actors.

Although sexual crimes are a rather difficult topic, the makers managed not to make the series too gloomy and frustrating, without trivializing the cases. However, the targeted use of loosening up scenes and the renunciation of all too drastic images ensure that the entertainment value of the series is not crushed by the seriousness of the subject matter. If you like well played and atmospherically filmed thrillers with thrilling stories and interesting characters, you shouldn't miss this first season of "Code 37". Absolutely worth seeing!

Picture + sound: The technical implementation of the individual episodes is on a good to very good TV level. The image is absolutely clean and the overall sharpness is absolutely satisfactory, especially for brighter outdoor shots. Only in the detail representation in darker scenes there are slight deductions of points. The stereo sound allows the dialogues as well as the atmospheric soundtrack to come into their own. Not really spectacular, but absolutely appropriate for a crime series. Good!

Extras: The disc unfortunately doesn't have any bonus material on offer on trailers until now.

Fazit: "Code 37" is an exciting and, despite very difficult topics, extremely entertaining crime series that was successfully shown on Belgian television between 2009 and 2012. With an extremely strong leading actress, a likeable team where the chemistry is just right and extremely thrilling cases, the 13 episodes of the first season offer the best European thriller entertainment, presented on DVD in good picture and sound quality. But there is a very clear one: Absolutely recommendable!