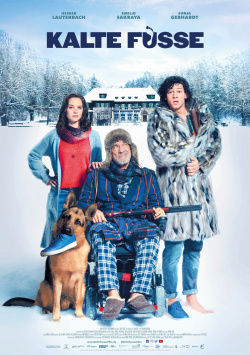 Denis (Emilio Sakraya) has a problem: He owes his boss a lot of money. And if he can't pay, it could be painful. That's why he must agree to break into the villa of the wealthy Raimund (Heiner Lauterbach), who is still in hospital after a stroke. Actually an easy game - if Raimund hadn't been brought home one day earlier than planned. To top it all off, his granddaughter Charlotte (Sonja Gerhardt) appears, who thinks Denis is her uncle's nurse. The small thug has to play along now, for better or for worse, especially as a heavy snowstorm makes an escape impossible. It's just too bad that Raimund has long since seen through the game of his "keeper"…

"Cold Feet" has many successful aspects. There are some really good, pleasantly black humorous jokes, a few wonderfully bizarre ideas and with the well-placed Heiner Lauterbach and Sonja Gerhardt, who could convince in top-class productions like "Deutschland 83", director Wolfgang Groos was able to engage a good ensemble in front of the camera. The story may not be really original, but it is still very entertaining at its core. All good reasons, then, that you should be entertained here as a viewer in the best possible way.

And yes, in a few moments this is also the case. But unfortunately Wolfgang Groos is trying too hard to get in touch with the "Fack ju Göhte" audience. With a wooden hammer he knocks out some of the jokes, which should be rough and funny, but unfortunately they are not. A frozen penis or the pleasurable licking of pee-pee icicles may still be funny for a young audience, but for viewers beyond puberty such jokes might only cause a tired smile - or annoyed yawning. The real problem is that Groos doesn't find a uniform tone when it comes to humour. There's almost old-fashioned slapstick, a few good jokes and then suddenly it's rough below the belt line, only to ripple along again rather well-behaved afterwards. All in all this just seems incongruous and cramped - but unfortunately not really funny.

If the audience had been trusted with a little more level here, "Kalte Füsse" could have become a really good comedy with cult potential. But that's how the many good approaches sink into unfinished tales, which even the charming actors can't save anymore. Well, sometimes less is just more. Those who can laugh heartily at different variants of genital jokes will certainly get their money's worth here. But if you like to laugh about a bit of clever humour, you won't have much fun with these "cold feet". Worth seeing with some concessions!