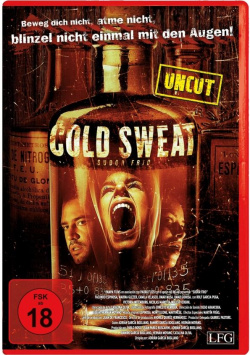 Contents: Roman (Facundo Espinosa) is sure that his ex Jackie (Camila Velasco) left him because of an internet acquaintance. Together with his good friend Ali (Marina Glezer) he wants to find out if Jackie actually has a new lover. Ali has also made contact with the strange man on the Internet and has arranged to have dinner with him in his apartment. But instead of an attractive young man, Ali finds two sadistic pensioners in the house who lure women into their homes via the Internet and then abuse them for cruel experiments. While Roman waits in front of the house, Ali lives through a real nightmare in which nitroglycerin plays a particularly explosive role. Only when Roman sneaks into the house and can free Ali does the tide seem to turn. But the old gentlemen still have some bloody surprises in store for their guests...

The horror thriller "Cold Sweat" is based on a rather nice initial idea. Two former members of the paramilitary, right-wing extremist group AAA (Alianza Anticomunista Argentinia), who have put a lot of explosives and weapons aside and are now living out their sadistic tendencies, which they already had as children, have a lot of potential for exciting and bloody moments in which horror fans could have great pleasure. Director Adrían García Bogliano also realized some moments of this very effectively. Whenever he spices the whole thing up with an extremely dark humor, his movie works really well. For example, when Ali wants to get help from the neighbours of the mad pensioners and of all people he comes across a troop that does not want to call the police for very obvious reasons. And also the "slowest chase in film history" announced on the DVD cover has a very high entertainment potential.

The good ideas that can be recognized here in the beginning are not worked out carefully enough to be able to really convince in the end. There are too many things that either are completely illogical or simply remain unexplained, which makes the story itself look a bit immature and diluted. Also, the main characters and their conflicts with each other are simply drawn too one-dimensional for the viewer to develop a real interest in them or their fate. If Bogliano had provided a little more substance here, "Cold Sweat" could have been a real direct hit. Because the dark setting, the starting idea of the story and the two crazy old men offer just the right potential for that.

So the movie "only" became a quite entertaining genre contribution, which has some splatter, some tension and some really good scenes to offer. If you don't expect any more and don't question the whole thing logically, this DVD premiere can definitely be recommended to you. Worth seeing!

Picture + sound: The picture on the DVD is dominated by green and brown tones, which underline the atmosphere of the film well. The picture sharpness is on a decent level, only in the detail display there are some visible weaknesses in the many dark scenes. The Dolby Digital 5.1 mix is quite powerful, but rarely has real surround moments to offer. First and foremost, the frontally mixed dialogues and the music determine the action.

Extras: As a bonus, unfortunately, there is only the teaser, the trailer and TV spots for the film.

Result: "Cold Sweat" is a quite decent horror thriller, which has some very good and original ideas to offer, which sometimes get lost in really big logic holes. If you don't want to question the whole thing too much, just want to see some splatter, attractive actors and probably the slowest car chase in film history, you can take your chances here. Worth seeing