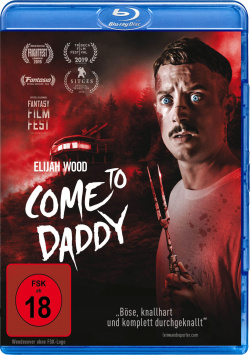 Film: Norval (Elija Wood), a DJ from L.A., travels to a small coastal town in Oregon. Here lives his father (Stephen McHattie), whom Norval hasn't seen for many years. For him he is actually a stranger. But after his father wrote him a letter, Norval hoped that this might change. But after only a few minutes he realizes that this will not happen. Because his father does not leave a good hair on his filius, which finally results in wild insults. But just when Norval believes this meeting couldn't get any worse, a real surprise awaits him in his daddy's remote house - a surprise with bloody consequences.

With his directing debut "Come to Daddy", New Zealander Ant Timpson, producer of audience favourites like "Turbo Kid" or "Housebound", has staged a nasty little horror shocker. The film oscillates back and forth between bitterly wicked comedy and bloody thriller, and about halfway through the film there is also a tangible surprise, which suddenly steers the action in a whole new direction. Timpson succeeds perfectly in building up an expectation in the audience, which he can then break with relish.

he is supported by a perfectly cast Elija Wood and a Stephen McHattie, who embodies the old man who harasses his son at every available opportunity with almost sadistic joy. Of course, we don't want to reveal the direction in which the frictions between the hipster DJ and his estranged father are developing. But this much can be said: The more events unfold, the more bloody and coarse the whole thing becomes. Timpson also always aims below the belt, which sometimes overshoots the mark a bit. There are some scenes that are simply not funny anymore, but just tasteless. But even these moments still work out pretty well, because they are embedded into such a wonderfully slanted framework. "Come to Daddy" may not be a masterpiece. But this flick is a damn entertaining genre work. For this there is one thing that is clearly worth seeing: Worth seeing!

Picture + sound: Although not a few scenes take place in the dark, the picture quality leaves a good overall impression in terms of sharpness and contrast. There are a few minimal point deductions in the detail display, but this is compensated especially in the brighter outdoor shots. The sound is available in a decent DTS-HD 5.1 Master Audio Mix, which can score with some well-placed surround effects and powerfully mixed dialogues.

Extras: Bonus material is unfortunately - except for a few trailers - not available.</Conclusion: "Come to Daddy" pleases with a good portion of black humor, a good twist in the middle of the movie and a wonderfully weird acting Elija Wood. Although there are also some weaker or too overdrawn moments in this grotesque horror flick, the entertainment value remains pleasantly high for most of the time. The Blu-ray presents the movie in good picture and sound quality. Unfortunately, there is no bonus material. Nevertheless, for all those who like it weird and bloody, this disc is clearly: Recommendable!</p>