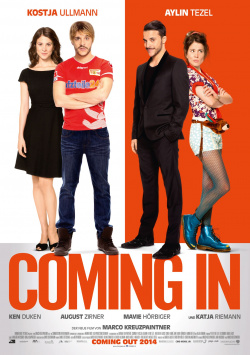 Tom Herzer (Kostja Ullmann) is one of the most successful hairdressers in the capital. The cosmetic products that the favourite of the Berlin gay scene brings out are also selling extremely well. So good that even an American company wants to invest in Tom - but only if it can also win the ladies as customers. Although Tom is not at all happy with the idea of producing products for women, he is persuaded to take this big step by his partner and manager Robert (Ken Duken). To find out what women want, Tom has to work for a few days in the small salon of the self-confident Heidi (Aylin Tezel) in the middle of Neukölln. For the star hairdresser it's the purest Armageddon, but contrary to expectations he's quite impressed by Heidi's captivating Kiez charm and her management of the salon. And Heidi, on the other hand, realizes that under Tom's arrogant facade hides an extremely sensitive, lovable man. And before she knows it, she's developing feelings for gay Tom. And he too suddenly feels something that threatens to turn his life completely upside down…

Marco Kreutzpaintner has already tried many different subjects in his career as a filmmaker. Whether youth drama ("Ganz und gar"), fantasy ("Krabat") or relentless thrillers about human trafficking ("Trade"), the award-winning director and screenwriter has always faced new challenges. And so, on his excursion into the genre of romantic comedy, he didn't just want to stage another representative of this subject according to scheme F. Rather, he wanted to tell a story in which the lovers still have real hurdles to overcome. Social differences are no longer a real issue and cultural differences have been completely overused in this genre. The only thing that really excites people in our society today and creates real challenges is overcoming sexual pigeonholing.

This is how Kreutzpaintner came up with the idea of "Coming In", a comedy in which a gay man and a heterosexual woman find each other. With many exaggerated clichés the director wants to tear open the boundaries in our minds and show that a feeling like love can't easily be put into a drawer. A very nice and praiseworthy idea in itself, but its implementation was only successful in places. At the beginning, the characters are simply too overdrawn stereotypes, which goat their way through a very shrill and very predictable scenario. This gets on your nerves as a viewer and, apart from a few scenes, isn't really funny either.

If you've survived the first twenty minutes, the movie gets a lot better, the characters become more likeable and also a bit more profound and even the rather meagre humor suddenly works out really well. The chemistry between the charming Kostja Ullmann and the really enchantingly playing Aylin Tezel alone clearly increases the entertainment value of the film. The fact that Kreutzpaintner tries to give the story a rather unusual twist after the deliberately very conventionally designed beginning makes the comedy really interesting to a certain extent.

After a weak beginning and a convincing middle part it unfortunately goes downhill again towards the end. No question about it, especially for hopeless romantics the finale is really very, very beautifully realized. On the way there, however, Kreuzpaintner puts on a bit too thick and lets the clichés, which until then had been kept within bearable limits, regain the upper hand. The last act works much better than the beginning of the movie, though. But the spark doesn't really want to ignite anymore.

Thus "Coming In" is a nice comedy with nice actors, a good soundtrack and some really nice ideas. But the potential that the story, the actors and also the director have brought with them, was actually only fully exploited in the middle part. Therefore it is enough at the end only for one: only worth seeing with some concessions!