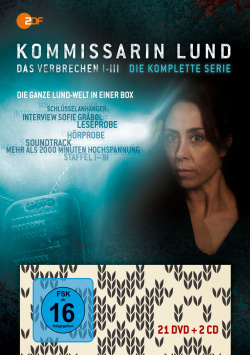 Film: Commissioner Lund said goodbye to her viewers in a haunting finale at the end of 2012 after three urgent cases. Despite a US remake, a novel and an audio book, the conclusion of the third season marks the actual end of the successful crime series. Crime novels often lose their appeal after first viewing, as the tension virtually disappears into thin air as soon as the perpetrator is known. But the three seasons of "Commissioner Lund - The Crime" are much more than simple crime food. The stories take place on several levels, are stirring and intense and therefore offer the best entertainment even if you already know the series and the perpetrators. For fans the DVDs of the series are therefore an absolute must. If you don't own the individual relay boxes yet, you will now have a particularly attractive opportunity to bring this outstanding piece of Danish top TV home with the attractive complete box.

Her first TV case from 2007 Sarah Lund (Sofie Gråbøl) prepares for her farewell from Copenhagen because she wants to move to Stockholm together with her son and her fiancé. Her last task will be to train her successor Jan Meyer (Søren Malling). The disappearance of the 19-year-old student Nanna Birk Larsen offers the perfect opportunity for a smooth relay handover. But when the girl is found dead and the tracks lead to the campaign team of the liberal politician Troels Hartmann, who is running for the post of mayor, Lund's departure is postponed until further notice. Because the fall draws ever larger circles, whereby always new abysses open up. While Lund and Meyer try not to lose sight of the traces in the ever-increasing circle of suspects, the father of the dead student is driven to the edge of vigilante justice out of desperation. But this is by no means the most dramatic part of the investigation...

Two years have passed since the investigation of the murder of Nanna Birk Larsen. Commissioner Sarah Lund was transferred to the countryside as a consequence of her behaviour during the investigation, where her skills are virtually not required. But after the murder of a lawyer in Copenhagen, Lund's former boss Lennart Brix (Morten Suurballe) asks the commissioner for her help. A good step, as it soon turns out. Because at the latest when a second body is found, it becomes clear that this crime is far more than just a murder. Lund must investigate not only in military circles, but also in the highest political circles, as this seems to be a case of terrorism or an act of revenge, which can be traced back to a bloody operation in Afghanistan. But as so often the commissioner comes across a wall of silence rather than cooperation and soon there is the next victim...

Commissioner Sarah Lund has had enough. After 25 years in the police service, she wants to be transferred to the office to perhaps finally be able to kitten the disturbed relationship with her son Mark (Eske Forsting Hansen). The discovery of a dismembered, tattooed corpse near Copenhagen harbour is to be her last case. Her new, still very young colleague Asbjørn (Sigurd Holmen le Dous) is surprised how listless the legendary Sarah Lund dedicates herself to the investigation. Even when two more bodies are found on the ship Medea lying in front of the harbour, the whole thing is a simple routine case for Lund, to which she does not have to dedicate much commitment. But that will change soon...

At the same time Prime Minister Kristian Kamper (Olaf Johannessen) is trying to secure his re-election by forming an alliance with the shipping company and oil company Zeeland, which guarantees that the company will keep its location in Denmark and not relocate it to China, as large parts of the board plan. Robert Zeuthen (Anders W. Berthelsen), chairman of Zeeland, is ready for this alliance. But then his daughter Emilie is kidnapped, which seems to be directly related to the murders on Medea. Now the case takes on a whole new meaning and for Lund a real race against time begins. Together with Mathias Borch (Nikolaj Lie Kaas) from the Danish intelligence service PET, with whom Lund was affiliated at the police academy, the commissioner dives into a net of political intrigues and dark crimes, which seems to be too entangled to liberate the little Emilie from it alive...

"commissioner Lund - The Crime" offers a very complex plot with numerous secondary characters in all three seasons. Being able to keep track of, certainly requires the full attention of the viewer. Admittedly, here and there there there are a few moments in the longer first season that drag on a little tenaciously. But all in all, the stories, which are about corruption in politics and in the police, terrorism, abuse, racism or family quarrels in addition to the actual murder cases, are from the first to the last minute first-class suspense television with great actors, intelligent scripts, authentic-looking equipment and atmospheric music. Again and again it becomes clear that here the many successful individual aspects intertwine like gears and make the series work as a whole.

What really distinguishes the series in the end, however, is its main character, magnificently embodied by Sofie Gråbøl, and the changes she undergoes in the course of the three seasons. Sarah Lund, who the viewer meets at the beginning of the first season, who shows a lot of cheerfulness and is looking forward to a harmonious future with her son and her fiancé, has little in common with the woman at the end of the series. The makers have created a figure that is not a super-human, but is drawn by their work. And so in the end she has nothing more to lose, which finally leads to a very intense final. The last minutes of the show may divide the spirits. The end won't leave anyone cold, though.

"Commissioner Lund" may be the end, but fans will surely enjoy this very special series for a long time to come, although this good complete box is of course very helpful. If you don't know "Commissioner Lund" yet or don't have the DVDs at home yet, you simply can't miss this box: Absolutely worth seeing!

Picture + Sound: The technical realization of the three seasons is on a good TV level, which shows a good overall sharpness and an atmospheric color scheme, especially in the bright scenes. In the darker sequences, on the other hand, some distinct weaknesses become noticeable every now and then. Here the picture often appears a little coarse-grained, the contrasts leave much to be desired. The sound is available in Season 1 in a decent stereo mix, in Season 2 in Dolby Digital 5.1 as well as in Stereo 2.0 and in Season 3 only in Dolby Digital 5.1. All audio tracks transport the dialogues clearly and powerfully from the speakers, with the Dolby Digital 5.1 mix only the ambient noises and smaller sound effects come to the fore a little better. Good!

Extras: Besides the well-known extras like a Making of, interview and casting scenes for season 1 and further interesting interviews for season 2, the complete box has some more goodies for all fans to offer. In addition to an extensive interview with leading actress Sofia Gråbøl, there is also the soundtrack to the series, an exclusive audio book sample on CD and an excerpt from the book on the first case. And as a very special extra, the box also comes with Lund's Norwegian sweater as a small felt pendant for the key ring.

Fazit: For three seasons, "Kommissarin Lund" has offered all fans of Nordic suspense crime food at a very high level. Sofie Gråbøl has continued to develop the multi-layered character, which eventually leads Lund to the decision she makes in the finale of the third season, which brings this series to a very intense end. A great mixture of classic crime thriller, political thriller and deeply human drama, which fans of Danish tension TV, but also all other lovers of first-class TV productions should not miss. absolutely recommended!